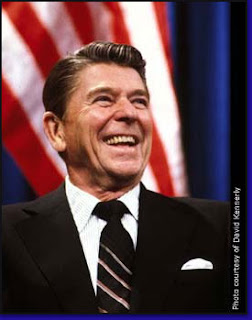 Reagan's library is located in Simi Valley, CA. Construction began in 1998 and it was dedicated on 4 NOV 1991. (I was married on 14 NOV!) Interesting historical note: Presidents Nixon, Ford, Carter, Reagan, and George H.W. Bush were present when the library was dedicated.

The Reagan library has some cool exhibits including Reagan's early years in Dixon, IL, his career in film, and his time as California's governor in the 1960's.

What struck me, especially with the governor's exhibit, was that Reagan faced the same challenges that California faces now. California was in debt and facing an energy crisis. By the time he left office, California had made some hard decisions and was on the road to recovery.

What resonated with me, however, was the Cold War displays. There is a piece of the Berlin Wall on the grounds. I had been to Berlin and even have pieces of the wall myself. I saw the wall before it fell. I had a front row seat to the end of the Cold War in Nov 1989 as I was stationed in Germany when East Germans stormed the wall. I can still hear Reagan's voice. "Mr. Gorbachev, tear down this wall." 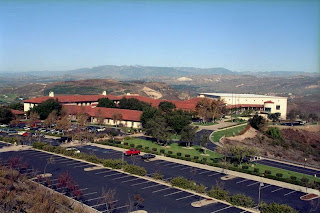 The most impressive exhibit is Air Force One, the Boeing 707 aircraft which carried Reagan and many other presidents around the world. It was retired in 2011 and transported to the library in pieces. The exhibit began showing in 2005.

Currently, Air Force One rests on pedestals 25 feet above the ground and you can walk through the plane, acquiring a feel for presidential travel.

The Reagan library is still an active place. In 2008, it hosted the GOP presidential debates. President Reagan was laid to rest on the grounds against a view that embodies the love and affinity he felt for California and the west.

Does anyone want to share their thoughts and impression of the Reagan years?
Posted by Stephanie Burkhart at 6:00 AM