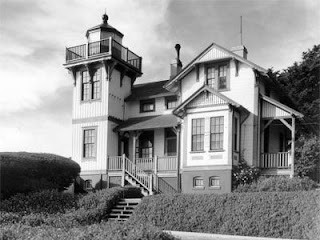 San Luis Obispo is on the central coast of California. It's very nice country, rural, picturesque, and San Simeon, where the Hearst castle is, isn't that far away. It's been 9 years since I've been out that way and for me it's about a 4 hour drive north of Castaic on U.S. Rte 101.

In 1867 President Andrew Johnson issued an executive order to have the lighthouse built. At the time, the land was called Port Harford. It would take 10 years before a bill was introduced into the House of Representatives for the construction of the lighthouse. Meanwhile, a pier had been constructed on the land in 1864. This was a 540 foot pier. In 1878, a tidal wave struck the area and washed this pier out to sea. During low tide, you can still see the pilings of the old pier from the Availa Pier that is now there.

As I research these lighthouses for my series, I discover there's always a story behind the house. It was 1888 and still no lighthouse had been built at Port Harford. A passenger and cargo steam ship called "The Queen of the Pacific" was traveling the harbor around 2 am. It was dark and the captain misjudged his clearance. The ship was 500 feet away from the pier when it sunk in 22 feet of water. Thankfully, most of the ship was still above water and no lives were lost. The ship eventually refloated but it was argued that had there been a light, the ship would have safely made it to the pier.

Construction on the lighthouse began in 1889. The lighthouse was finished in 1890. Amazing what a shipwreck can do, isn't it?

In 1893, the kerosene lamp was replaced with an electric one.

During World War II, a radio listening station was built in front of the lighthouse.

In 1961, the Coast Guard pushed the original double building over the cliff using a bulldozer and replaced the structure with a more modern one.

In 1969, the Fresnel lens was retired. An automated electric light was installed. Note: A Fresnel lens design allows the construction of lenses of large aperture and short focal length without the mass and volume of material that would be required by a lens of conventional design. Compared to conventional bulky lenses, the Fresnel lens is much thinner, larger, and flatter, and captures more oblique light from a light source, thus allowing lighthouses to be visible over much greater distances.