Meeting before the Snooze at Longboards 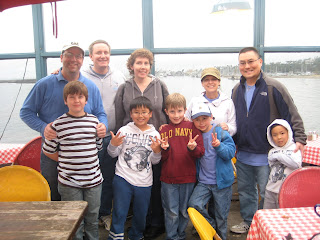 I very rarely have a chance to hang out with my son on Cub Scouts events. Usually, with my schedule, I'm working during the times of the meeting or I have to watch our younger guy, Joe. This time around, the Santa Barbara Zoo Snooze was being held during vacation week and Gramme was able to watch Joe, so I had a chance to accompany Andrew (who is a Bear Scout) and my husband on the Santa Barbara Zoo Snooze.

Our adventure starts in the evening when you set up camp on a lawn next to the lion exhibit or in our heated, indoor classroom. Then our instructors lead your group through a series of exciting, hands-on educational activities including up-close animal encounters and behind-the-scenes explorations. An evening snack is also provided.

In the morning, your group will enjoy a delicious pancake breakfast, another up-close animal encounter with one of our zookeepers, a train ride, and creating a special breakfast treat for one of our Zoo animals. At the conclusion of our program, you are welcome to explore the Zoo with your group on your own to see all of your favorite animals in the light of day! 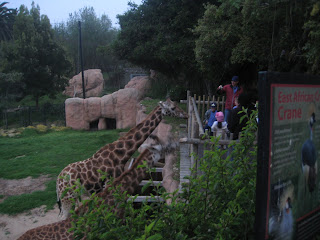 I can't say enough wonderful things about the Snooze! Our day started at Longboards in Santa Barbara. We met up with a couple of families from Andrew's den and had dinner at the restaurant on the wharf there in Santa Barbara. For me, what I LOVE about Santa Barbara is that it's about an hour's travel north of where we live, but it's quiet, low key, and there's plenty to do and see. It makes a great day trip if you just want to get out. I really enjoyed getting out and just visiting with the other cub scout adults in Andrew's den.

The day was a bit overcast and misty, but it wasn't anything that we couldn't adjust to. I loved the view of the ocean and the seacoast from the wharf.

After we ate, we headed off to the zoo. We got there a little early and waited in the parking lot for the majority of the pack to show up. Andrew belongs to Cub Scout Pack 40 out of Santa Clarita, CA. At 6:30 pm we were let into the zoo and led to the little knoll near the lions. There we set up our tents. Our tent was a little small, but we did fit a queen size air mattress in it.

While my husband put most of the tent up, Andrew and I helped a little. After our gear was in the tent we were broken down into 4 groups. If anything, my only unhappiness with the zoo snooze was that it was a bit of a hike to the bathrooms. LOL!!

Stephanie, our guide, with "Rosy Boa." 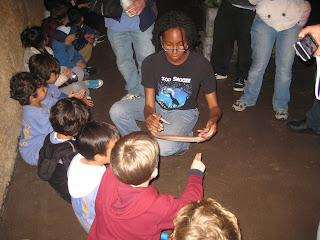 We had a great instructor/guide. Her name was Stephanie and she was very knowledgeable. Our first stop: Feeding the giraffes.

The zoo has 3 giraffes. Selma is about 20 years old (human years). Then there's Audrey, 3 years, and when they got Audrey last year, she had a surprise for them - she was pregnant. Baby Daniel is now 6 months old and he's a cutie. Giraffes have really funky tongues - purple and slimy, the better to eat vegetation with.

The sun was setting and there was a light mist when the giraffe feeding was done. Stephanie took us for a behind the scenes look at the zoo. Our first stop: The animal hospital.

At the animal hospital, we learned the animals get their yearly checkups there. Only two animals in the zoo don't – the elephants and the giraffes. We had to wipe our feet on antibacterial stuff before we went in. After that we went to the animal kitchen.

After the BE, Stephanie took us to the "Ewww" exhibits were we saw a lot of creepy, crawly things. She even brought out a rosy boa, a type of snake, for us to pet and check out.

When we finished visiting with "Rosy" we had a popcorn snack near the elephants. The ambience was cool, but we were downwind of bird poop. ☹ 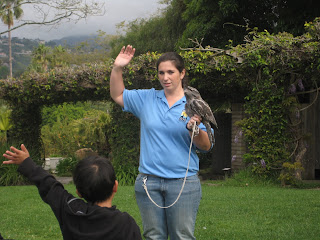 Stephanie was a great guide. She interacted well with the kids and was able to answer all our questions.

The evening finished, we retired to our tents. It was around 10:00 pm. Our tent was a little cozy and it did mist while we were sleeping. At 4 am, the lions gave us a wake up call with a couple of roars, but I was so tired I went right back to sleep.

7 am we got our zoo snooze official wake up call. It was still overcast, but no mist. We packed up, brought our gear to the truck and it was time for breakfast.

Breakfast was fab – pancakes, coffee, bacon, sausage, oj. I enjoyed it. And I was hungry. Being 40 something and all, I just don't have the same energy I had when I was 20 something and the breakfast hit the spot.

After breakfast I got a couple of zoo snooze t-shirts for the boys in the gift shop, and then we went to the elephant pen to come up with a BE for the elephants. We hid food in boxes and all around their pen. It was really cool. If anything, though, I thought it was a small space for them. There were two elephants, Suzie and Little Mac. I think the bigger of the one weighed in at about 8,900 pounds!

We also visited with Stanley, the bird. I can't remember what type of bird he was, but he wasn't an owl. Stanley was very friendly, but he trainer said he was a little lazy. It was a amazing just how well he blended in with a tree.

BE for the Elephants 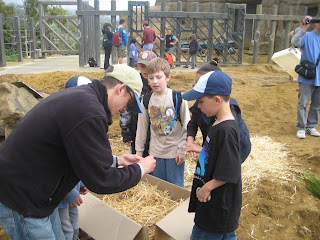 We had a train ride around the zoo. The best part was chugging past the lions. The male lion was on his back – paw on his stomach – sleeping. The bum! LOL!!

After the elephants we were released from the snooze and checked out the gorilla. When we left we hit up Rusty's Pizza near the wharf before heading home.

I had a great time. Andrew & my husband did, too. If you ever get a chance to check out a similar-like program with your zoo or get a chance to do it in Santa Barbara, I highly recommend it. It's a great learning experience outside of the classroom. Kids and adults will both have a great time.

Smiles
Steph
Posted by Stephanie Burkhart at 6:57 AM