Today I'm playing a little catch up with my posts, so I've had fun with my hodgepodge - I hope you do, too.

My opening picture is the "Wolf" Moon. Usually, the January moon is the Wolf Moon. It's the moon just after the start of winter. January is a cold month at night and the wolves are known to come out and howl their discomfort. Thus, the name of "Wolf" Moon. So why am I talking about wolves in late March?

Because I'm working on a newsletter article about alpha, beta, and omega men for my Writing.com Romance/Love newsletter and I've learned some interesting stuff about each.

Since I'm a paranormal fiction writer and I've taken on werewolves in my writing, it's good to know the difference between alpha, omega, and beta men. I think we're all a little familiar with Alpha men - loners, mostly, they are confident, cocky, powerful or in postions of power, assertive, masterful - let's face it superior. He usually has one weakness that brings him down to earth. They are the quintessential "romantic" man in romance fiction.

The "beta" man is the everyday man. They are charming, affable, and are a family type guy. Unlike the alpha male, the beta guy has lots of friends. They'll stand up for what they believe in, but don't care for confrontation. Alpha males will embrace head-on confrontation. The "beta" guy is found more often than not in contemporary romance novels.

An "omega" man is somewhere in the middle of the alpha and beta. The alpha must have the recongization of being the toughest, meanest, smartest guy. The omega knows he is - he doesn't need the recoginzation. The omega male does seek out friendship. He has one or two meaningful relationships around him. He doesn't care for shallow relationships. The Omega man doesn't want to be a leader of a group. He doesn't want to belong to any group. Think of it this way - the Alpha male is all out in everything he does. The omega male is much more subtle in everything he does.

My hero in my upcoming release, "The Hungarian," Matthias Duma, is an omega man. He knows he's the bomb, but he keeps it to himself. He has several meaningful relationships with Lazlo and Janos, example, but he doesn't have an acquaintances. (like a beta would have) It fits him and the story.

One Snowy Knight by Deborah Macgillivray. 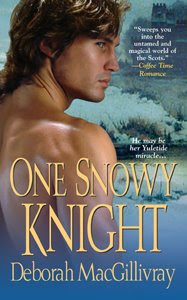 This is an historical story, taking place during the late 1200's in Scotland during the time of Edward I (Longshanks) of England. Edward has taken Scotland and is placing his England lords in Scotish holding. Noel de Servian has been awarded Cragienden, but on his way, the winter wind and snow take charge and his horse bolts from him, leaving him alone and injuried in the snow just outside of the castle's wall. The current lady, Skena MacIain, finds him and nurses him back to health.

This is a story rich in the time period. Both Noel and Skena are interesting characters and the supporting cast is just as enjoyable. Skena has faced a lot of hardship. Noel has led a hard life.

While I generally stay away from Scots tales, what really intrigued me was Macgillivray's book trailer. The book trailer had me sold. I'm glad I picked up this book. It's a wonderful tale to lose oneself in. I also like how Mcgillivray has captured the "flavor" of the language without dragging the story down. I can read and understand what the characters are saying with ease.

I'll be participating in the Long & Short Easter Egg Hunt this month. It starts on 29 MAR which is just a couple of days away. Long and Short are giving out some great prizes. The egg can be found on my blog, here, so be on the lookout for it.

Here's a link to their promotion: http://www.longandshortreviews.com/promo.htm

Have fun today all,
Steph
Posted by Stephanie Burkhart at 6:52 AM