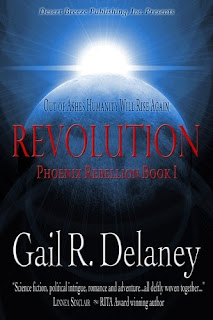 I just finished this awesome book by Gail Delaney. If you enjoy a good science fiction story, you'll love this. *smiles* Steph

Delaney scores with Book One of the Phoenix Rebellion, "Revolution." Set in the near future, Delaney puts together an ensemble cast of characters and pits them against the Areth for the survival of the human race.

The Areth come from outer space and appear human. They've come to Earth and shared medical technology with us, but little else. A group of humans, "The Phoenix Rebellion," believe the Areth do not have peaceful intentions toward the human race. Covertly, a member of the Rebellion, Dr. Caitlin Montgomery, infiltrates the Areth's medical complex in New Mexico. Caitlin learns that an Areth scientist, Kathleen, gave birth to a half-human, half-Areth child, Michael. Michael's father is a human, Col. Nick Tanner. Caitlin finds Nick in Maine and shares the information with him. He's stunned. He thought his wife and son had died in childbirth. Without a second thought, Tanner joins the Rebellion, despite the fact that his feelings for Caitlin are complicated due to their previous affair which ended badly.

Nick finds General Castleton in Colorado and meets other members of the Rebellion – a married couple, Lilly, who is a doctor and her pilot husband, Jace. There's also an empath, Dr. Beverly Surimoto. After a carefully coordinated plan, the Rebellion attack the Areth's complex in New Mexico, hoping to free the Areth's subjects – including Michael. An Areth scientist, Victor, has befriended Michael and helps the Rebellion. All is not well with Victor though, as he begins having a mental breakdown. The escape from the Areth's complex in New Mexico is a thrill ride, but one of the Rebellion loses his life and the fate of the human race hangs precariously in the balance.

Delaney's writing is sharp. After a quick introduction to the Areth, Delaney jumps into the story. The plot flows well, never lingering. Delaney uses a good economy of words to paint descriptions. It's easy for the reader to visualize her futuristic world.

Delaney's characters are what makes this science fiction story shine. Col. Nick Tanner is a passionate man who has been hurt deeply in the past. Learning to trust Caitlin again is a struggle. Caitlin, for her part, realizes the folly of her youth, and tries to make up for it. The couple's chemistry is on a slow, smoldering burn that threatens to consume both when ignited. Victor's plight is heartbreaking, especially since he's an alien who shows Michael compassion. Michael's condition is intriguing. It's never fully explored in this book, leaving the reader wanting to discover more about him.

The story is "sophisticated" for romance readers. Delaney's love scenes are intense, yet tasteful. Book One: Revolution is a story packed with adventure, excitement, and love, making it a thrilling start to "The Phoenix Rebellion" series.
Posted by Stephanie Burkhart at 8:35 AM