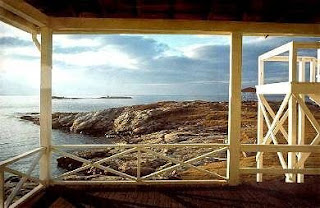 Ah, Portsmouth! I have fond memories of this little town, but not from my childhood, from my years as a 20 something. hehe.
The picture in my blog is a view from one of the Isle of Shoals. This set of islands are off the coast of NH and Maine. There are 9 island and 4 belong on NH and 5 belong to Maine. Cpt. John Smith of Ponchahotas fame introduced the islands to the Western World in 1614. One lives year-round on the islands. A famed double-murder took place on Smuttynose Island in the 1800s (the basis for the book and movie "The Weight of Water"), and New Hampshire's most famous poet of the 19th Century, Celia Thaxter, was raised there, the daughter of lighthouse keeper Thomas Laighton.
I had a chance to visit the islands when I was younger, about 20 something. I had just married my husband. ( I was young when I got married - 23) and I wanted to show him the rich variety of my New Hampshire home, so with my friends, Idgy, Karen, and my sister, Christine, we set off. I remember we caught the boat in Portsmouth and sailed right on over. It was a lazy summer day with not much to do but enjoy the view. I did get to see a bridge where it lifted up between the two towers and I enjoyed watching that. I had never seen that type of bridge before.
One of my most treasured personal pics is of me, Brent, Idgy, Alyssa, and Christine on the island looking out. If I can span it, I'll post it a little later on.
As a side note: I think the isles would make a great romantic setting for a story.
I never visited Portsmouth when I was a kid. Portsmouth has a rich history, though. I didn't actually getting around to visiting it until I was older. I would come home from military leave and go up with my friends, Idgy, Karen, or Alyssa. I remember one time, Idgy and I explored Strawberry Banke, an old neightborhood that was a reinactment from colonial days. Very cool.
Portsmouth has a rich history of being a "navy" town. It also was the home of Pease Air Force Base which has since been closed.
Interesting Historical Note: Paul Revere rode to Portsmouth from Boston to tell the residents that "the British were coming."
Portsmouth even has a bewery which I visited. I love the local/regional beweries. The beer is always so much fresher, but I can't remember the name of it. Redhook, I believe?
I haven't been to Portsmouth in years, but I have fond memories. Anyone else have a thought on Portsmouth?
I hope you've enjoyed learning a little about this NH gem.
Steph
Posted by Stephanie Burkhart at 7:18 AM