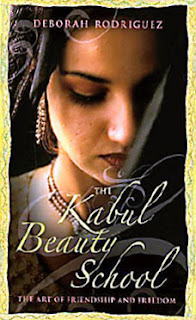 Written from Debbie Rodriguez’s personal experiences in Afghanistan between 2001-2006, “Kabul Beauty School” not only tells Debbie’s story, but the stories of the Afghanistan women that Debbie met during her stay in the country. Rodriguez uses an easy writing style that has the reader turning the pages without realizing it. The stories of Afghanistan and it’s women will swell up a range of emotion from happiness to despair, but thankfully Rodriguez leaves us with hope for the future.

Rodriguez begins her tale in 2001. She worked as a hairdresser in her mother’s salon. She was also in an abusive relationship. Wanting to challenge herself, Rodriguez takes emergency aid classes and is sent to Afghanistan two months after 9-11. Rodriguez spends several months helping out, and toward the end, when people learn she has skills as a hair stylist, the idea to create the Kabul Beauty School is born. Debbie leaves to go back to the states, but will be back to help teach school when it opens.

While Debbie is in the states, she finally leaves her abusive husband, but it isn’t an easy break up. Thankfully, Debbie has the support of her mother and sons. She also works on supplies for the new school. When everything is ready, Debbie heads back to Afghanistan to help get the school off the ground. It’s a satisfying time as the reader sees Debbie’s strength in the face of her hardships.

Conditions in Afghanistan are pitiful. It is the epitome of a war zone. Not only that, the Afghanis have strict customs towards men and women, customs that most modern civilizations don’t understand. Rodriguez paints a beautiful example of the difference in the opening chapter of the book where she goes to attend the wedding. Her friend, Roshanna, is expected to be a virgin for her arranged marriage – but she isn’t. She was married previously and abandoned by her husband after he took her virginity. After several attempts to consummate her new marriage don’t produce any virginal blood, Debbie pricks her nail and stains her blood on a rag. Then she gives it to Roshanna to prove her virginity. The story is heartbreaking.

Rodriguez uses a very conversational style that made turning the pages easy. I felt like I was in the trenches right there with her. Her strength to pave new paths in Afghanistan stood out, but when it came to her own path, Rodriguez, surprisingly, marries an Afghan man, Sam. Sam understands Debbie’s western ways, but doesn’t necessarily approve. He also has a wife with eight children. It’s something that’s hard to except in the western world.

Rodriguez tells the story of how the Beauty School is kept open through 2006, until she’s forced to leave. She also shares stories of several more Afghan women who went to the beauty school. These women had to overcome hardships that are practically unthinkable by the western world.

Rodriguez’s story leaves the reader feeling hopeful for the future. “Kabul Beauty School” is a tale of human strength, endurance, and heartbreak that will have the reader lingering on Debbie’s story days after finishing the novel.
***********
An Update: According to several posts on the Internet, Debbie went back in mid-May 2007. She didn't stay long. (I could be wrong on the date, but I think I'm accurate.) She stayed maybe three days but had to leave since she and her son received death threats. - And supposidely her Afghan, husband, Sam was not to be trusted.
Upon publication of her book, it was not well received in Afgahistan. The women mentioned in the book were upset with Debbie. Debbie was supposed to share a percent of the royalities with them, but they claim they haven't any seen any percentage. Their lives, since the book, have become uncomfortable in Afgahistan. The Kabul Beauty School is due to come out as a movie in 2010 or 2011.
Posted by Stephanie Burkhart at 2:08 PM