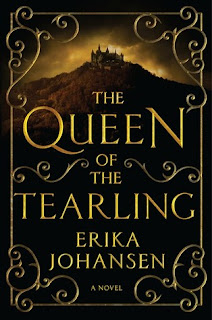 Johansen's writing shines as brilliant as an intricately cut sapphire with her first novel, "The Queen of the Tearling." Set in a futuristic society, the reader discovers a time and place uncharacteristically backward, a feudal society lacking electricity, formal education, and comforts including medical care. Tearling is a country under Mortmesne control, forced to send shipments of slaves to keep the peace between the two countries.

It is into the world Kelsea Raleigh is born, heir to the Tearling throne. She's marked by a brilliant sapphire that hangs around her neck and a deep scar burned into her arm. She's raised by foster parents, each given a certain responsibility to impress upon her. The novel opens with the old Queen's guard finding nineteen-year-old Kelsea hidden away. They must escort her to the capital so she can finally assume the position for which she's been so carefully groomed – ruler of the Tearling.

The journey is filled with danger despite the loyalty of Kelsea's companions, Mace, Pen, Carroll, and Mhurn. Kelsea confronts several emotions: courage, bravery, hope, fear, loyalty, and the stirrings of love. Her emotions and moods infuse the stone around her neck with a power she has not experienced before. When she arrives in the capital, her first act is to stop the shipment of Tearling slaves to Mortmesne. Now, can Kelsea despite her youth and inexperience, keep her people safe?

Johansen effortlessly blends action, adventure and characterization. Her writing style is easy to read and understand, especially in light of the fantasy setting. There's magic, heroes, and villains accompanied by despair, hope, and courage. I simply couldn't put this book down. I needed to know what would happen next to Kelsea. There are a lot of unexpected turns and surprising layers to this wonderfully nuanced story. Consider me on the hunt for the sequel. I would recommend this story for 13-year-old readers and up. This book is thrilling from the first page to the last!