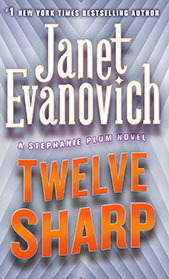 Book Review for: Twelve Sharp
Written by: Janet Evanovich
St. Martin’s Press
ISBN: 978-0312-349530
4 Stars
Heart-pounding Suspense!
Evanovich steps up her game – and Stephanie’s – in this installment. Vinnie’s been writing a lot of bonds which means more work at the agency. On top of this, the agency’s top bailsman, Ranger, goes missing. It’s a problem Stephanie doesn’t need.
While tracking down her FTA’s, Stephanie gets more drawn into Ranger’s troubles. When a “wife” shows up claiming to be looking for him, Stephanie knows it’s serious. She discovers Ranger’s daughter has been kidnapped and when his “wife” is found dead, Stephanie realizes a deadly imposter is after Ranger’s life. If Stephanie isn’t sharp enough, her friends just might lose their lives.
Evanovich’s writing is engaging, witty, and sharp. She’s an easy, enjoyable read with characters that will have you laughing and crying with them.
There’s a mini plot with Sally Sweet and Lula which provides more lighter moments in contrast to the heavier, nail-biting suspense involving Stephanie and Ranger. As usual, the supporting cast entertains with delightful charm.
“Twelve Sharp” is a cozy mystery with romantic elements and heart-pounding suspense. It’s a race against time that will keep the reader engaged and turning the pages. A worthy edition to the Stephanie Plum series. I highly recommend this book.
Question for you: Who is your favorite character in th Stephanie Plum series?