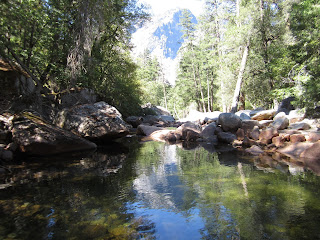 We wanted to get an early start on our last full day in Yosemite because its generally cooler in the morning, so we woke up early and stuffed the backpacks with water, food, and goodies before leaving Wawona around 8. We arrived at the valley floor around 9, parked, and hopped on the shuttle to take us to Mirror Lake.

Now, for me, the ambience of going to Mirror Lake is #1 it's a lake, #2 you see the reflection of Half Dome in the water. We were dropped off at the stop and decided to take the dirt foot path up the 1 mile hike. Mules also use the dirt path so my 6-year-old was totally grossed out. Mind you, at 6, boys have a bad habit of being a little gross themselves…

When we arrived, we discovered a trickle of a lake. The area was becoming "reclaimed," and in the process of becoming a stream. The boys took off their shoes and walked through the water, having a blast. Eventually, my husband and I crossed over. Down by the dam, plenty of people were out sunning and playing in the water. We found some shade and pulled out our lunches. A squirrel found us and watched us through narrow, intense eyes. I don't know if he expected a crumb or two, but the rangers told us not to feed the wild life so we didn't.

We hiked back on the road and made our way back to Yosemite Village. I raised my hand and Ranger Elsa signed me in as a Jr. Ranger. Heck, I figured if Andrew could do it, so could I.

When we returned to the valley floor, we headed over to Yosemite Falls.  The hike was about 3/4 miles and pretty flat - easy for Joe to do.  The falls is rather high up, but this time of the year, in Summer, it's a bit of a trickle.  A lot of people were down at the base of the falls so it was kind of crowded.  My husband got some great black and white shots.

Then it was time for the most important adventure of the trip – Souvenir Hunting! We hit up the big store in the village. It had everything – food, beer, postcards, and clothes. I found a comfy burgundy sweatshirt to wear and Andrew found a happy face bottle that said 'Yosemite.' Joe got a red Yosemite baseball cap.

Our backpacks now stuffed to the max with souvenirs, we drove back to Wawona and fixed up tacos for dinner. Andrew and I went to Campfire with a Ranger. Our ranger played a little guitar for us. We sang "This land is Our Land" and even learned what a raven sounds like. 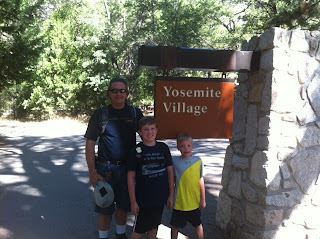 When Saturday morning rolled around it was time to go. My air mattress was practically flat after five days! We cooked up breakfast with bacon and camp toast and everyone chipped in to tear down our campsite. The journey home back to Castaic took about 3 ½ hours.

There are things I wish I could have done like go to Glacier Point and look at the stars. I love astronomy and the skies are so clear up in Yosemite, it was music to my soul. I wish I could have seen the blacksmith in Wawona and a couple more waterfalls. I can honestly say I'm looking forward to going back this October to see what the park looks like in the fall.

The best part of Yosemite was just spending time with my family, learning about the park, and sharing my love of the outdoors with my boys. Oh, and it's features, the valleys, rivers, and granite reminded me of growing up in New Hampshire. 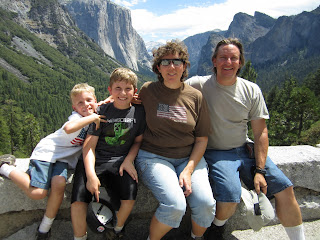 How many of you have visited Yosemite? What's your "take away?" For those who haven't been, what time of the year would you want to go and why?

Thanks for hiking with me.
Smiles
Steph
Posted by Stephanie Burkhart at 4:30 AM