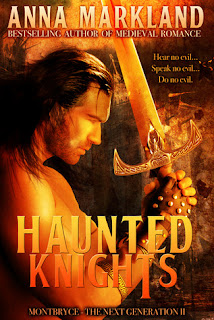 Markland pens a suspenseful tale that will have readers on the edge of their seats with "Haunted Knights." It's the reign of Henry III, and the Montbryce family is thriving in Normandy and England. When Adam Montbryce, heir to Belisle Castle, is incapacitated, he seeks his fortune in England, never expecting to find hope.

Adam is a vital young man who loses his hearing and his ability to produce children after an illness. He sets out with his brother, Denis, who is a dwarf, to England to find his fortune. There he meets the Lallemont brothers. When a fire breaks out at Kingston Gorse, Adam and Denis help rescue the Lallemont sisters, Rosamunda and Paulina.  Rosamunda is mute and Paulina is a dwarf as well. While the women appear to be perfect for Adam and Denis, can they overcome threats, kidnapping, and ridicule to find not just hope, but happiness?

Markland's researched her topic and it shows, giving a voice to disabilities. The plot is straight forward. What Markland does well is offer a metaphor for those with disabilities that challenge them. Denis may be a dwarf, but he doesn't let his condition stop him from doing what he wants. He's an aspiring character. Adam is also noble and honest, but doubts Rosamunda at a critical time, leaving the women vulnerable.

There's plenty of action, adventure, and excitement that will keep the reader wondering what's coming next. "Haunted Knights" is a historical romance that contains several sensual romantic scenes. For those who enjoy historical stories with medieval knights I recommend this story.  Overall, "Haunted Knights" proves chivalry never goes out of style.