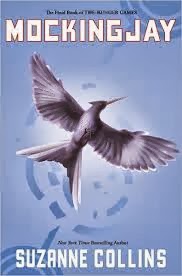 Collins pen a suspenseful, nail-biting conclusion to the "Hunger Games" series with "Mockingjay." Katniss needs to assume the mantle of the "Mockingjay" to give Panem's rebellion a chance at success, but what will it do to her soul?

Katniss recovers from the Quarter Quell games after being saved by the rebellion leaders who are aligned with District 13, but she's damaged – physically, mentally, and emotionally. As she recovers, she adapts to life in District 13 where her mother and Prim live, too.  Her friend, Gale, is a major leader in the rebellion, but it's not until Katniss learns that the Capital has Peeta does she agree to become the rebellion's Mockingjay.

Katniss will play her role to the best of her ability, but she is constantly watched by President Coin of District 13, who consistently reminds Katniss that her role is only that for a figurehead.

When Katniss and her squad penetrate the Capital, the action and suspense build to a pulse-pounding pace. Can Panem finally defeat the evil that rules its society and do away with the Hunger Games for good?

Collins is easy to read. She captures the nuances of Katniss' emotional torment with finesse, reminding the reader the turmoil that war plays on the human psyche.

The best part of the novel was the characters. Despite Katniss' emotional angst, she saves Buttercup, the cat, for Prim, a noble gesture indeed since Katniss can't stand the animal. Gale's focus remains firmly on the rebellion, while Haymitch and Finnick's motivations are tempered by those they care for. Coin proves just as ruthless as Snow in unexpected ways.

The end is full of action and will tear at the heartstrings with its unexpected twists and unsuspecting surprises.

The book is mainstream young adult fiction set in a dystopian future and is appropriate for readers ten and over. "Mockingjay" is guaranteed a pageturner! I couldn't put the novel down and once I finished, the characters stayed with me for days after. I highly recommend this story.
Posted by Stephanie Burkhart at 4:30 AM