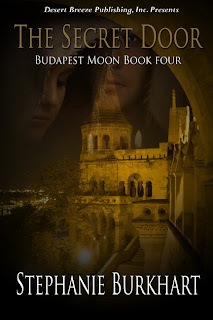 My cover for "The Secret Door" won the InD'Tales Cover Contest for August! I really appreciate everyone's support in the contest.

BLURB: It's 1927 and Lord Zoltan Kristos, Hungary's Minister of the Interior, takes great pains to hide the fact he's a werewolf from the world. Despite his efforts, he's recognized when he goes to the Austrian-Hungarian border to inspect the area for damage from a recent rare earthquake.

Zoltan is accused of stealing Kurt Meklau's witch, Inna, and is recklessly pursed to Volturn Manor, a residence belonging to another werewolf family, the Vargas. After a fight with Meklau, Zoltan barely escapes and his adversary is found dead.
Sophia Varga and Tomas Martin find Zoltan. Sophia is determine to attend to Zoltan's injuries and protect her home, but when Kurt's father, Marcus, comes seeking revenege, Sophia is tested like never before. As Zoltan and Sophia work together, attraction and desire flame between them.
Will the secrets Volturn Manor harbors offer Zoltan and Sophia the clues they need to defeat Marcus and give them the opportunity to explore their feelings for one another?
REVIEWS:
5 Stars, Joy Cagil, Amazon Reader: "Its exciting action, paranormal elements, and romance will not disappoint a reader."

"I was quite pleased to find an original take on the werewolf mythology and was impressed by the author's choice of location and historical accuracy. The Secret Door is a fun read and is highly recommended." - 5 Stars, Jack Magnus, Reader's Favorite Reviews.

"There is plenty of action and strife in this story as well as softer and tenderer emotions between the couples. Overall, I found the story entertaining." 3 Cups, HCHarju, Coffee Time Romance


He looked her over seductively. His heart skipped a beat with desire. She rubbed the lotion into her hands and placed them on his stomach. He groaned, reaching out with his left hand and threading his fingers into her hair, jerking her head back so they were eye-to-eye. She set her jaw. His pulse pounded. Something intense flared between them, yet she kept her hands on his abdomen. Encouraged, Zoltan tugged her toward him, pressing her chest against his. Her nostrils flared and her brow furrowed in confusion.
He stopped, reminding himself he needed to offer a choice. "Do you want me to kiss you?"
"No." The sound of her denial was weak. He held her close.
"Do you want me to release you?"
"No."
"How should I solve my predicament?"
"I don't know."
"I do." He leaned close, her sweet fruity scent sending his senses into overdrive. He placed his lips on her jaw and kissed her.
BUY LINKS:
PUBLISHER: http://www.desertbreezepublishing.com/budapest-moon-book-four-the-secret-door-epub/
AMAZON: http://amzn.com/B00B96KCYS
BARNES & NOBLE: http://www.barnesandnoble.com/w/budapest-moon-book-four-stephanie-burkhart/1114281656?ean=2940015989762
ALL ROMANCE EBOOKS:  https://www.allromanceebooks.com/product-budapestmoonbookfourthesecretdoor-1091313-140.html