My Inner Girl, Half-Dome, and a ton of Granite 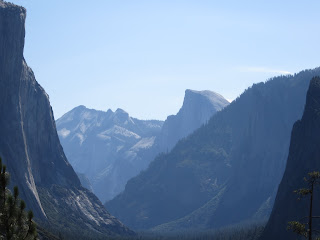 Our first day at Yosemite proved exciting. We were in a "loop" (at Wawona) and every spot was taken. Our fellow campers crawled out of their tents between 6:30-7 am. Okay, it was early. My Inner Girl dragged me to the restroom where I brushed my teeth and popped in my contacts. There was no soap or anything to dry your hands in the potty. Thank goodness the toilet paper was provided. Drip dry is not my thing.

My DH cooked up breakfast and then we were off. Our destination: the Valley Floor. The road felt long. It had a lot of curves and kept going up. I learned that Dramine was my husband's best friend. When he got to the top, we drove through a tunnel and exited to the most gorgeous view in the world – El Captian, Half Dome, and the 3 Brothers granite rock formations. Of course my husband parked the truck and we took a million pictures. (That view is on my California Yosemite license plate.)

After our photo op, we drove down to the Valley Floor and found Bridelveil Falls. Eager to hike, we poured out of the truck, took more pictures and raced off to the trail. The falls itself seemed but a trickle; it was a thin stream of water. There were no rushing cascades of H20, no spray, no loud noises, no "Ansel Adams" vibrant photo opportunities, just a slow, small steady stream of water – and a ton of people.

The Inner Girl felt a little overwhelmed. In my 20's, a crowd of people never bothered me. Now in my 40's, I can't help but feel a little nervous. 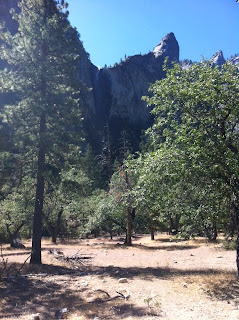 In my Ranger book, I listed Bridelveil Falls as my special place in Yosemite. What impressed me the most was how a lot of natural elements came together – water, granite rocks, trees, birds, the sun. I've always felt a deep spirituality in nature and this spot embodied that for me. My son, Andrew, has an Ansel Adams 4x6 of Bridelveil, but my goal is to order a poster for the house, to remind me of the spirituality the spot invokes.

After visiting Bridelveil, we parked in the Valley day lot and set out exploring. After hopping a bus or two, the family found the Valley Visitor Center. I took a picture with the AAA Westways Magazine. (Now, I just have to find the time to email it in.) I discovered glaciers formed Yosemite. (like much of my childhood home, New Hampshire, was.) We got our bearing, ate lunch at Denigan's Café, and bused it over the Yosemite Lodge for tram tickets. 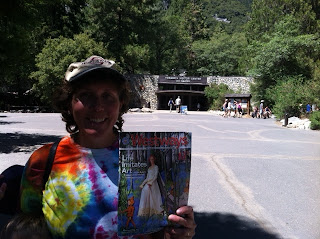 Before leaving, we found the Ansel Adams Gallery. My Inner Girl died and went to Black and White Heaven. What I love about Adams is his ability to capture the beauty of Yosemite with black and white photography. My favorite photo of his is "Moon Over Half Dome." During my time in Yosemite, I learned that it's such a dynamic place to take pictures, and black and white photography works better than color prints. There are a lot of shadows in Yosemite due to the stark, granite terrain, steep elevations, and old, majestic trees. Black and white captures the shadows much better than color. 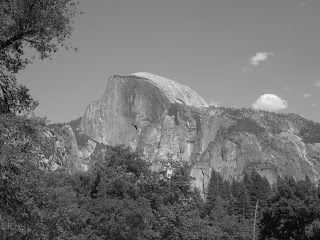 Our trip back to Wawona was uneventful. My DH broke out the Dutch oven and he cooked up a pork rib, BBQ sauce meal with carrots and celery. Joe wrote in his journal. I helped the boys with their Ranger books. Soon, nighttime was upon us.

Before I depart, I wanted to touch a little bit on Half Dome. The view from the tunnel makes it appear that at one point it was more rounded and an "event" occurred that broke it in half. This is not the case. Half Dome formed naturally it its appearance. To hike up to Half Dome, you need a permit. Maybe if I was younger I'd be up to the challenge, but nowadays, I'll have to pass.

Next: My Inner Girl takes a tram ride with the boys.

Question: What kind of souvenir would like to receive from Yosemite?