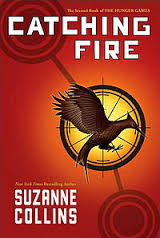 Collins crafts a nail-biting, edge of your seat sequel with "Catching Fire." Katniss' victory in the arena changes her life and relationships with her mother, sister, Gale, and Peeta, but Katniss isn't the only one dealing with change. The districts are as well. Unrest and uncertainty surround a nation and Katniss' heart.

Set in the future, this dystopian story opens with Katniss trying to reconnect with her "roots," and her friend, Gale, but everyone is on edge and Gale's mood reflects the restless change in the air.

Katniss goes to live in district 12's victor's lane, but her discomfort is obvious. The capital and president insist on a wedding with Peeta. Soon, Effie Trinket shows up to prepare the couple and take them on their victory tour. With uncertainty and unrest creeping into the districts, the 75th Hunger Games are announced. The tributes for these games will be reaped from previous district winners, assuring Katniss another trip into the area. Will Katniss fan the spark of rebellion into a fire while fighting for her life in the arena?

Catching Fire is one of the best sequels written. Collins is easy to read. The plot strikes the perfect balance between action and character development. The descriptions allow readers to see the novel unfolding without lingering.

The best part is the continuing emotional journey of Katniss. She's being pulled in multiple directions, yet she's fiercely determined to stay true to herself. The supporting cast is also rock solid and each of them find depth that rings true to their nature. While not a romance, the triangle of Gale/Katniss/Peeta is well done and will tug on the reader's emotional core.

The novel is mainstream fiction and will appeal to readers 10 and over. Catching Fire is a definite page-turner. I highly recommend this book.