STEPH: I don't know much about your novels, the Starlight series. What are they about?

SUSAN: My Starlight series - Cassandra by Starlight, Together in Starlight and Starlight and Promises - is the story of Cassie Wallace, an independent and older woman, meeting an up and coming actor, Bennett Saville, who happens to be ten years younger than she is. They meet through tragedy, and the attraction between them develops into a relationship that spans just over three years.

Cassie is drawn into Bennett's world of wealth, youth and show business. He is on his way to the big time and is very much in demand by both the film world and, unfortunately for Cassie,  other women.

Cassie adores Bennett and can't imagine a world without him. He's mercurial, emotional, strong and very sexy and her whole world changes just being in his world and in his life.

Bennett finds a soul mate in Cassie, someone he can depend upon when his show business world gets too much. 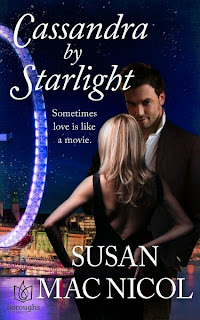 Together through the series, they face a host of things sent to try them. Bennett's schizophrenic mother who causes harm to Cassie, Bennett's terrifying stalker who knows his every move, leading to an extremely traumatic experience for him, ghosts of the past coming back to haunt them both, as well as supernatural events in the theatre they own in London. Gang warfare, cults and the growing popularity of Bennett as his career takes off, all cause their own brand of challenge that the two have to face together.

SUSAN: Hmm. My publisher calls me one of the most prolific writers they've ever known. It actually took me only eight weeks to write the full Starlight trilogy. Since February 2012, I've written eight full length novels, two short stories and a screen play.

I think I was so entranced with writing the story of Bennett and Cassie that I was like a demon possessed and had to get the words out there while I was 'in the zone'. It's the only explanation I have for being able to churn out over 300 thousand words in that space of time. Their story just needed to be told.

STEPH: Did you have to do a lot of research for it?

SUSAN: Yes, I did a lot of research. This is a romance suspense series and a love story but there are some serious topics featured in all my books.

Cassandra by Starlight deals with the film and theatre industry, suicide, child abuse, schizophrenia, (as Bennett's mother suffers from this illness), female on male rape, (a controversial topic that needed some delicate handling,) and celebrity stalking and the psychology around both stalker and stalkee.

Together in Starlight has supernatural elements, a spousal abuse theme in a variety of different ways, both physical and psychological, the vagaries of fame and having a devoted fandom and the premise of blackmail and money laundering.

Starlight and Promises - this one tackles cancer, the London gang situation, the ever growing demands of stardom and what that brings, and the philosophy and aftermath of being in a cult. I always thought the lady on the front over looked older than Bennett, so hopefully this is conveyed too.

STEPH: How does the cover reflect the story within?

SUSAN: The cover for Cassandra by Starlight hopefully gets across the fact that the story is set in London, that it involves glamour and the acting world and that it has a really sexy leading man.

Together in Starlight was simply an indulgent excuse to have a gorgeous Bennett Saville staring into every woman's (and man's) eyes, giving them that 'come hither' effect and the mountains in the background reflect the Tibetan angle in the second book. 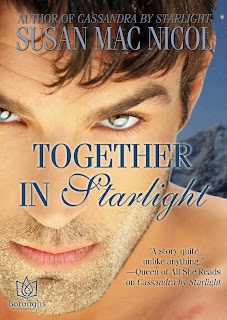 STEPH: What's the theme of the novel?

SUSAN: The theme is an older woman meeting a younger man, and being drawn into a world so unlike her own that it is literally worlds apart. It's about two people so unlikely to have met in the normal course of events yet finding each other. And managing to stay together against many things thrown their way.

STEPH: Cassandra Wallace -Cassie -is the heroine. What are her strengths? Weaknesses?

SUSAN: Cassie is independent, strong and outspoken. She's mature and feisty. She has a lot of love to give for the right man. But she's a little emotionally challenged. She had a bad experience when she was younger that made her keep things inside and manage them herself.

STEPH: What does the hero, Bennett Saville, find appealing about her?

SUSAN: Apart from the fact she's beautiful and sexy, he likes her steadfastness, her love and her complete down to earth approach. Cassie grounds him like no one else has ever been able to do. Bennett has a need for security in his life, for a place to come home too that is safe and reliable, when the demands of show business get too much. Cassie is his rock, the one he leans on when things get too much.

STEPH: Do you have an ebook reader? If so, which one.

SUSAN: I have a Kindle, as well as having the app on my smart phone, and a Kobo reader on my tablet.

STEPH: Who are some of your favorite authors?

SUSAN: I love Stephen King as a great horror writer, and Joe Donnelly. I also find Josh Lanyon and Tom Ward incredible writers, along with Harper Fox, and J L Merrow. Deborah Harkness is an inspiration to me as is Phil Rickman. And anything Jonathan Kellerman writes I will read. I have a very eclectic reading taste.

10. Fun Question: What is your favorite place to visit on vacation?

I have to say we love the Eastern European states. We've been to Croatia and Romania, which were both incredibly rich and historial places. Transylvania was awe inspiring and we actually went to Dracula's Castle. Next stop will probably be Bulgaria or Slovenia. Having said that the one place I really want to visit is Russia.

Blurb for both books

Book title - Cassandra by Starlight- Starlight Series Book 1/3 (full length novel)
Genre - Contemporary Romance Suspense
Buy Link:  http://bit.ly/URrmlU  (www.boroughspublishinggroup.com)
Amazon links -  US  http://amzn.to/RQYa1d UK http://amzn.to/T1lGJQ
Release Date: 13 August 2012
Blurb: A London woman is swept off her feet into the glamorous yet surprisingly dangerous world of an up-and-coming star of stage and screen.
Unconventional though she may be, Cassandra Wallace leads the life of an average Londoner, from blind dates to rush hour traffic. Then, along comes Bennett Saville. Sensitive, charming, erudite, the up-and-coming actor is like the hero of a romantic movie. He counteracts the tragedy that brought them together, and from the tips of his Armani loafers to that scorching hot kiss he seems absolutely perfect. Only, he’s ten years younger and from the upper class, and those emerald eyes beget dangerous secrets. The world is a stage, full of hungry leading ladies, and how long can any fairy tale last before a villain appears? Yet, on Bennett’s arm each new day is an adventure, and a true romance will always find its happy ending.

Book title – Together in Starlight- Starlight Series Book 2/3 (full length novel)
Genre - Contemporary Romance Suspense
Buy Link:  http://bit.ly/URrmlU  (www.boroughspublishinggroup.com)
Amazon links -  US  http://amzn.to/RQYa1d UK http://amzn.to/T1lGJQ
Release Date: Feb 20th 2013
Blurb: For superstar actor Bennett Saville and his fiancée Cassandra Wallace, returning to “The Val” theatre in London means greed, lust, and ghosts from the past—and that’s off stage.
Bennett Saville is sexy. At the height of his career, the English star of stage and screen is everything a woman might desire, as fiancée Cassandra Wallace well knows. They’ve seen the world together, from L.A. to Shangri La. Yet shadows persist, even in the spotlight. At home they face lust, greed, and ghosts from their pasts—and that’s offstage. There is also “The Val”. Bennett’s aged London theatre holds a mystery four centuries old, cast in starlight, waiting to be shown. Intensely personal, impossibly passionate, that play must go on…and Cassie and Bennett must see it through together.