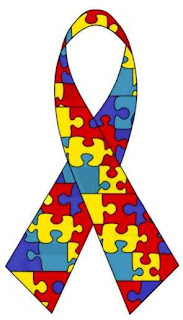 According to the latest information released by the US Center for Disease Control, approximately 1 in 88 children are found to be on the autistic spectrum. Autism is 4-5 times more common in boys than girls. So what is autism?

It's a complex disorder involving brain development. Autism tends to emerge between 2-3 years of age and it presents in varying degrees with difficulties involving social interaction, speech, and repetitive behaviors. Many autistic children also have sensory processing issues.

A great online resource for autism is http://www.autismspeaks.org. They have a lot of up-to-date information along with a comprehensive list of symptoms.

The latest information from the Autism Speaks website indicates autism many have its roots in early brain development, but currently there is no one cause for autism. From Autism Speaks, the cause appears to be a combination of a gene at risk for autism and environmental factors that influence early brain development. Other environmental factors during and before birth include advanced parental age at conception, maternal illness during pregnancy, and difficulties during birth including periods of oxygen deprivation to the baby's brain.

My son is now 6 and his official diagnosis is Expressive Language Disorder. He's been seen by 2 psychologists at 2 different times (when he was 3 and 6) who have both come to the same conclusions – Expressive Language Disorder, but it hasn't been easy for me as a parent. I began being worried for him at 15 months when he wasn't talking. At 18 months he still couldn't say a word.  I took him to the regional center and he was evaluated.  He's had therapies since 20 months.  He's gone to speech, child development, group, and occupational therapy. He has sensory processing issues that affect his fine motor and sense of balance. Currently, he's in the first grade and while he still sees a speech therapist for misarticulations, he's mainstreamed 95% time of the time in a general education classroom. His sensory processing issues get in the way at times. He uses a chewy in the classroom and has a weighted vest. He's highly active and he goes to a social skills class.  I've heard it all – he's got ADHD, Asbergers, high-functioning autism and one thing I've learned as a parent – you are your child's best advocate. I've had to become a speech therapist, an occupational therapist, and an autism expert. For my son, he's succeeded because of the early intervention, but he also has a great support network. He still has to work hard and there's no denying his speech misarticulations and his sensory processing issues that mainly affect his vestibular and proprioception senses, but he takes hip-hop dance lessons, gymnastics, goes to religious education, and is a tiger cub scout– all mainstream.

When he was first seen, I received a lot of information from http://www.spdfoundation.net for sensory processing.  If you have any questions, searching out reliable online resources is a great start.  Also, hearing other parents stories offered inspiration and hope.

Patience, Understanding, and Caring are traits that will help everyone when dealing with autism. It doesn't just affect the child, but the family.

If you have any resources to recommend or would like to share a story or an experience, you're very welcome.
Posted by Stephanie Burkhart at 6:00 AM