News From the Writing World - A Look at the Amazon Fire 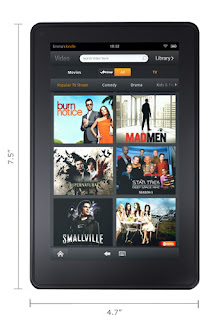 The Kindle Fire will be released on 15 NOV 2011 and is Amazon's answer to the tablet. It's biggest competitor is the Ipad.

What makes the Kindle Fire appealing is its $199.00 price tag. That sure beats the mininum $499.00 Ipad price. So how does it compare as a tablet?

The Fire will have 7" screen. (The Ipad has a 9" screen.) The smaller screen is one of the reasons the price is lower. The Fire's screen will be touch sensitive and have color. Overall, the Fire will be lighter and smaller than the Ipad.

**The Fire won't have a camera.

**The Fire has 8 hours battery life.

**The Fire won't have a microphone.

**The Fire will have availiability to music, movies, tv shows, and apps through Amazon Prime (Amazon's verison of ITunes.)

If you don't want all the bells and whistles of an Ipad, the Fire is a reasonably priced alternative. While I prefer 3G, the Fire has enough "pros" (vs cons) for me to deal with Wi-Fi. Quite honestly, I don't need a camera or microphone and a 7" screen is fine for me. I'm looking forward to it's release. I'd love to hear your thoughts on the Fire.

So, who's interested in buying the Amazon Fire? Why or Why Not?