News from the Publishing World 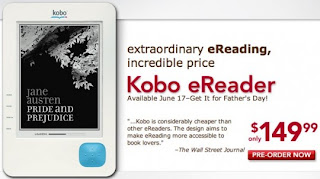 Hi All - I haven't done this in a while, but I thought I'd post about the recent news from the publishing world and my thoughts on it. I get my news from Publisher's Weekly online, an industry trade magazine about the publishing industy and you can find it at: http://www.publishersweekly.com

Harper Collins and Hachette publishing have been approached by the Texas Attorney General regarding their pricing of ebooks. The crux of it: "Apple, in seeking to attract content for the iPad, opted for an agency pricing model in which publishers set their own retail prices and receive 70% of the price while sellers receive the remaining 30%." Because of this, the pricing on some ebooks went UP. For example, from 9.99 as much as 14.99. That's a lot. (And this is for major authors) This is the "Agency Model" and major publishers like this. The traditional model is to have the retailer, say AMAZON, set the price.

Personaly the Agency model is not Reader/Buyer friendly. While the iPad is cool, it is pricey and it's not something I can afford right now.

#2 - Borders is Developing an ebook reader - KoBo. I don't much else about it but I'll look around. Right now it is not available but the book store is taking pre orders for $150.00. It is scheduled to ship 17 June. KoBo does not have 3G or WiFi but has Bluetooth access so it should allow downloads from your computer to the ebook reader through bluetooth. KoBo uses eInk Technology like The Nook and Kindle.

My notes: Kobo looks like the Kindle. I like the price as it's very affordable at $150.00. If you are looking for affordablity, it is comparable to the Sony Ereader.

#3 - The Nook outsells the Kindle in MARCH 2010. One of the reasons? The Nook sells in Target and Barnes and Noble Brick and Mortar stores. The Kindle sells only through the online store. (All though I think this might changing soon.)

Enjoy
Posted by Stephanie Burkhart at 7:10 AM