Genre Tuesday - A look at Steampunk 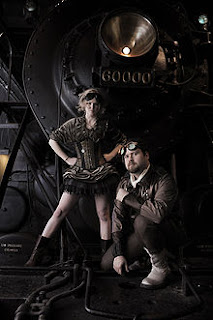 I heard the word steampunk the other day and raised an eyebrow. I was clueless. What was a steampunk romance? Steam with an attitude? I started poking around and found out it was just that – steam with a 'tude.

As the term implies, the story is generally set in the early industrial period where steam power is more widely known, such as early Victorian England, but it adds a second element such as a science fiction, speculative fiction, fantasy or paranormal twist. Adding to the complexity of the "steam" is that the story usually takes place in an alternate time, or parallel universe.

Steampunk, as a whole, has it's roots in the late 1980's, early 1990's, right alongside cyberpunk. According to Wikipedia, it was coined by author K.W. Jeter, who was trying to find a term to describe his writing – 19th Century settings which were typically Victorian and imitated actual Victorian age speculative authors such as HG Wells. In fact, HG Wells, and Jules Verne embody the type of steampunk technology that the genre embraces – they just wrote during the time period, the 19th Century. They were a century too early for steampunk! Current author of the steampunk genre include: KW Jeter, "Morlock Night," Tim Powers, "The Anubis Gates," and James Blaylock "Homunculus." There are several romantic authors who write with a steampunk twist including: Calista Taylor, Natalie Gray, and Katie MacAlister.

Steampunk settings are not limited to Victorian England. You could place your setting in the American west, but it has to meet the following criteria: it has to be in the 19th Century, it has to use "steam" power, and it has to have a sci-fi, speculative, fantasy, or paranormal element. Throw a romance in there and you have Steampunk Romance, which are also very popular in the Romance market.

"Steam," of course, is the central element to a steampunk. Technological inventions used in a steampunk shouldn't be that far off from those inventions and gadgets used in the 19th century. You might have a steam powered motor car that works much like a train. Or maybe even a steam powered dirigible. Or you could invent your own steam powered aircraft for your story. You might even have an early dated computer. The appeal of the Victorian era when it comes to technology is that it was an ungoverned time in regards to rules and regulations and an amateur inventor had just as much a chance as hitting on a good idea as a professional. Also, technological inventions didn't just have a metallic look that they do now. In Victorian times, they were works of art, with designs that infused personality.