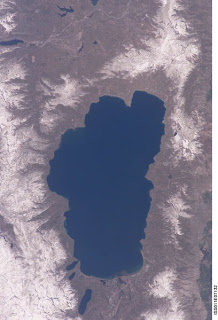 Here's another California place I've never been, but would like to go to - Lake Tahoe. The opening shot is Lake Tahoe from Space. Pretty, cool, huh? Now just imagine a line right down the middle. To the east is Nevada, to the west is California. The big California cities near the lake are: Tahoe City and King's Beach, both are on the northern side.

The lake was formed about 2 million years ago and is a part of the Lake Tahoe Basin with the modern lake being shaped during the Ice Ages. It is known for the clarity of its water and the panorama of surrounding mountains on all sides. On the Nevada side of the lake you'll find plenty of Casinos. Tahoe is known for winter sports including Skiing and snowboarding. 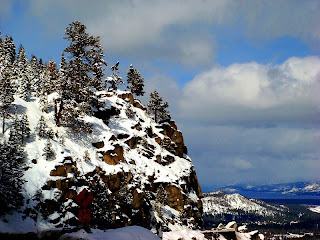 The Comstock Lode, a silver deposit just 15 miles (24 km) to the east in Virginia City, Nevada was discovered in 1858. From 1858 until about 1890, logging in the basin supplied large timbers to shore up the underground workings of the Comstock mines. The logging was so extensive that loggers cut down almost all of the native forest. In 1864, Tahoe City was founded as a resort community for Virginia City, the first recognition of the basin’s potential as a destination resort area.

No wonder why Nevada is the Silver State.

MANSIONS ON THE LAKE:

Lake Tahoe is also the location of several 19th and 20th century homes of historical significance. Vikingsholm was the original settlement on Emerald Bay and included an island teahouse and a 38 room home. 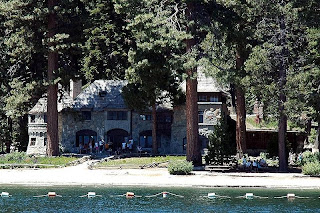 The foundation was laid in 1928, but the building was constructed in 1929 by 200 workers. Vikingsholm was built by Mrs. Lora Josephine Knight as a summer home. Some parts of the structure contain no nails or spikes, as a result of old-fashioned construction methods. Most of the building was made from materials found at Lake Tahoe.

Mrs. Knight is primarily known for building Vikingsholm, but she and her husband were primary backers of Charles Lindbergh's non-stop solo flight across the Atlantic in 1927. Tours are given of the home for a nominal fee.

Vikingsholm, along with the "Tea House" on Fannette Island and Emerald Bay, is a part of Emerald Bay State Park. Emerald Bay has also been declared a National Natural Landmark.

INTERESTING NOTE: Squaw Valley, near Tahoe City, was the site of the 1960 Winter Olympics.

Heck, I wouldn't mind going to check out this gem - in the summertime. hehe
Smiles
Steph