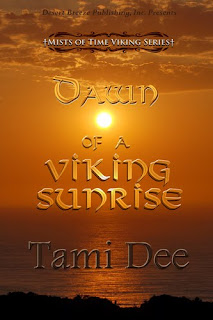 Hi all - I'm very excited about Tami Dee and "Dawn of a Viking Sunrise."

I just finished Tami's "Under A Viking Moon" and it was a great story. I wanted to read the sequel and last night I had a chance to start. I went through 7 chapters like nothing. I couldn't put the Kindle down.

Dawn of a Viking Sunrise is about Rosie, Kat's best friend from book 1. Rosie (in 2009( has been hunting down the Viking time traveling pendants since Kat has been gone. She acquired the pendant Leif had, but is looking for Kat's. Enter Prof. Fisher - her evil history professor. He's got the other pendant and tries to steal the one Rosie has. Rosie and Prof fight and during the fight, they time travel back to Denmark and then Scotland.

During the first trip, Rosie briefly meets Davyn Noddersson, Leif's brother. In the second trip, she lands in Scotland only to meet Davyn again, but this time he is Laird McCarty. For Rosie it's a shock. The man she was dating in the future, was named McCarty. (he was a cop and he is dead now, shot while chasing a doped up teenager)

Davyn is the uber alpha male, but he's got his hands full with Rosie. He also has both pendants.

What happens next? I don't know, but the first chance I get, I'm picking up the Kindle!

Kudos to Tami for creating such fantastic characters.
Smiles
Steph
Posted by Stephanie Burkhart at 9:52 AM