A Photo by Ansel Adams, taken in Yosemite. 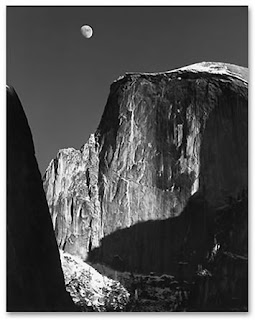 I've never been to Yosemite, nor has my husband, but it’s a goal of his to take the family camping there as soon as our youngest, Joe, now three, is old enough.

Not quite understanding his passion, but accepting it, I decided to scour the Internet for interesting tidbits about the park to share. I have to admit, I found some gorgeous pictures.

Oh – silly me. For the longest time, and I don't know why – I used to confuse Yosemite with Yellowstone. I guess it's because I'm not native and I thought the "Y's" were interchangeable? Trust me, my DH has set me straight.

Yosemite is a national park in East Central California, kinda' below Lake Tahoe. It's over 760,000 acres and reaches the western slope of the Sierra Nevada mountains. The park includes granite cliffs, waterfalls, low valleys, and giant sequoia groves. I'm interested in the giant sequoias myself. There are three groves, the Mariposa, Tuolume, and Merced. The oldest standing sequoia is thought to be over 1800 years old. 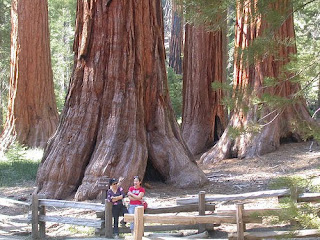 Before the California gold rush, the Paiute and Sierra Miwok Indians lived there. Then the Gold Rush hit, bringing in a lot of White people to the area. Eventually, the Indians were resettled. (That's the nice way of saying that the Whites forcefully moved them to reservations near Fresno. Personally, I find that chapter of American history appalling, and I have a deep respect for the Native American Indians here in America.)

REALLY COOL TIDBIT: The Wawona Tree was a giant sequoia over 227 feet tall and 90 feet round! It was believed to have been over 2,300 years old. Unfortunately, it fell in 1969 under a heavy snowfall. 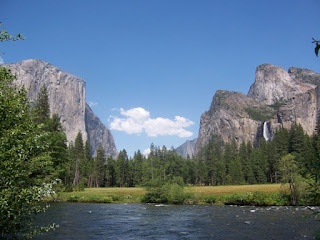 President Abraham Lincoln signed a bill on June 30, 1864, allowing for Yosemite park land to be preserved so the public could visit and it was to be managed by the state of California. The park, during this time, came under the protection of the 4th Cavalry Regiment, US Army.

President Theodore Roosevelt visited the park in May 1903. In 1906, he passed a law allowing the Federal Government to take over the park's management from California. It's probably a good thing, but for the last ten years, California can barely manage it's own government.

Yosemite is opened year round, but much of the park is closed from late autumn to late spring due to snow. I can't wait to go!
Posted by Stephanie Burkhart at 9:48 AM