Beyond the Story - Royal Pretender 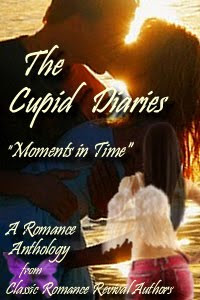 I'm very excited to announce that my historical romantic fiction, "Royal Pretender" is available in The Cupid Diaries, released by Classic Romance Revival this month. History has given us some inspiring romances from Elizabeth Barrett Browning and Robert Browing, to the turbolent Charles and Diana, love has endured, love has failed. Love brought a man to ruin with Henry VIII and love endured through to paint a shining example of its positive power with George VI and his Queen, Elizabeth (in World War II)

Surprisingly, in a time were arranged marriages were the norm, George II and Caroline of Ansbach were allowed to fall in love before they were married. It was a story I discovered over 20 years ago, but it is a story that has deeply resonated with me.

I was stationed in Germany in 1988. In July 1988, I won a trip to go to Berlin. While I was waiting at the train station in Bremerhaven I had brought a book with me. It was a book I had received in a care package and it was called, "Queen in Waiting," by Jean Plaidy. Jean Plaidy was a pen name for Victoria Holt and I grew on Holt's Gothic Romances. I thought I'd give the book a try.

I devoured it. I also discovered the world of historical fiction was fascinating. I went out and bought every book Jean Plaidy ever wrote.

Plaidy, of course, wrote historical fiction. While the events are true, she took literary license to paint the scenes. No one really knows how George acted when he first saw Caroline, but it's so much fun as a writer to picture the scene, to write it, to enjoy it – to paint it to the accuracy you believed it happened.

The history behind George II's story and Caroline is unique. George I wanted his son to be in love with the woman he married. He didn't want his son to suffer through an unbearable marriage as his had been. When his mother suggested Caroline of Ansbach, George I sent his son to Ansbach in disguise to meet the woman to see if he could fall in love.

Caroline was beautiful and enchanting. (If not a little melancholy) George II fell in love immediately and eventually sought her hand in marriage. She accepted of course.

I wanted to give their story my own romantic treatment so I wrote Royal Pretender. I hope you enjoy it!


I hope you visit Classic Romance Revivial and check out the Cupid Diaries - there are some lovely stories in there which capture the essense of romance and love. Here's a link to the site: http://www.classicromancerevival.com

Smiles
Steph
Posted by Stephanie Burkhart at 8:18 AM