What does Labor Day mean to You? #laborday

For those who have the holiday off – enjoy the time away from work with your family, BBQ, and relax. Me? I'm working the graveyard shift at the 911 call center. Some jobs require that selfless devotion to help others, so those with family members who are 1st responders and in the military on duty this Labor Day, thank you for your service.

What does Labor Day mean to me? For a long time I thought it was an American holiday to celebrate the end of the summer season. It was the time to get ready for school and prepare for autumn. When I was younger, the adults in my life told me it was to celebrate the 'worker.' But what did that mean to be a 'worker?' And how do unions fit into Labor Day? Are unions just an entity that stuffs its pockets with fat contracts the government/employer can't afford, or do they secure the worker with fundamental rights regarding an 8 hours work day, overtime, and benefits?

"A truly American sentiment recognizes the dignity of labor and the fact that honor lies in honest toil." – Grover Cleveland.

Grover Cleveland was president in 1894, and it was he who signed the bill that made Labor Day a national holiday. Previous to his signing, 30 states recognized Labor Day as a state holiday. (In 1894 there were 44 states)

When Cleveland signed the bill, the intent was to recognize the social and economic achievements of workers. The holiday was to be celebrated on the 1st Monday of Sept (instead of in May) because Cleveland was concerned that if Labor Day was in May, it would be associated with the Communist Labor celebration usually held on 1 May. (International worker's day in Europe)

Originally, Labor Day was to be celebrated by local town/city street parades to exhibit to the public the strength and espirt de corps of the trade and labor organizers. After the parade there would be festivals for the people to enjoy. 120 years later, the parades are fewer, the festivals less. Now we travel, we BBQ, we relax. We rarely go to an organized parade or a festival in honor of the worker. The true meaning of Labor Day is lost on many Americans today. 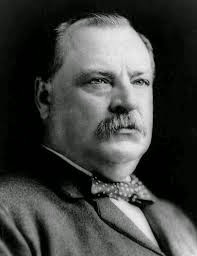 Grover Cleveland was the 1st Democrat elected after the Civil War in 1885. (The Civil War ended in April 1865.) He was known as a hard worker, honest, and fiscally responsible. He signed the bill making Labor Day a national holiday 6 days after the Pullman strike ended. The Pullman strike resonated nationwide in the summer of 1894. The Pullman company made railroad cars. In 1894, the company reduced workers wages, but not their rents if they lived in the community that supported the Pullman workers. The workers went on strike. Railroads stopped running west of Detroit, Michigan, because they wouldn't use a "Pullman" car. It got ugly when Cleveland sent in the military to end the strike. 30 workers dies, 57 were injured, and there was 80 millions dollars in property damage.

While Labor Day was a culmination of trade and workers' efforts over the years, (the earliest state labor days were celebrated in the early 1880's) it's ironic the national holiday was birthed in the aftermath of such a destructive labor strike.

Historians don’t rate Cleveland as a great president. They don't rate him on the bottom either. His legacy is mixed. He restored and strengthen power to the executive branch and brought and energy to the office not seen previously. However, Cleveland never offered a clear vision for America's future. His small town attributes that made him popular with the people; honesty, hard work, and independence. However, his small town thinking hindered his ability to truly lead as American grew in prominence on the world stage in the 1890's.

Question for all:  What does Labor Day mean for you?
Posted by Stephanie Burkhart at 1:30 AM