Goddess Fish Name Before the Mass: Review for Lord of Sherwood #booktour

Lord of Sherwood:  The Guardians of Sherwood Trilogy Book Three
by Laura Strickland

Curlew Champion, master archer, has always known his destiny.  With his cousin, Heron Scarlet, he will become a guardian of Sherwood Forest and further his people’s fight against Norman Tyranny.  But the third member of the triad is still to be revealed, the woman who will complete the magical circle and, perhaps, answer the longing in Curlew’s heart.

Anwyn Montfort has fled disgrace in Shrewsbury and come to Nottingham at her father’s bidding.  He wishes her to make a good marriage and settle down.  But the wildness that possesses her refuses to quiet.  She knows she’s been searching for something all her life, but not until she glimpses Curlew does her spirit begin to hope it has found its home.

Only the magic of Sherwood can bring them together, and only their union can complete the spell woven so long ago …

Curlew bowed again. When the man reached Nottingham and inquired after an under-forester called Champion, he would know this meeting for a farce. But Curlew would be well away by then.

A small, wicked smile tugged at one corner of his mouth. He straightened from his bow just as the young woman’s cart reached him. Any well-behaved Saxon underling, as Curlew well knew, would avert his eyes respectfully as she passed. Instead, he lifted them to hers.

And, shockingly, she returned his stare, bold and unswerving as any lad. Nay, not like a lad though—for she was all woman, this one, her face brimming with character, interest, and mischief. A smile twitched her lips as their eyes met and held—it said many things: that she knew he had just spun a fabrication, that she applauded him for it, and that she found him just as fascinating to look upon as he found her.

His blood leaped at that look and he condemned himself silently. This, a well-bred Norman miss, was surely no proper object for his admiration. Only, she did not appear particularly well-bred nor well-disciplined. Who was she?

And would he ever see her again?

Curlew stood there with the blood drying on his hands as the small train lumbered past, grateful for his escape, and utterly scorched by her gaze.

Not until they were well past did he draw a deep breath and strive to shake off the spell that held him.

"Lord of Sherwood" is a story full of suspense, magic, and love. Curlew and Herron are waiting for the third member of their triad to appear in order to protect Sherwood's magical forest. The sheriff has called his old friend, Montefort, to become a Forester and enforce the King's laws. It is with this command the last member finally arrives – Montefort's daughter, Anwyn.

Anwyn is a spirited young woman and Montefort is too lenient with her. After a brief meeting in the forest, Curlew haunts Anwyn's thoughts. When her father arranges Anwyn's marriage to the brute, Havers, Anwyn takes matters into her own hands. She runs away to Sherwood and into Curlew's arms. Now that the triad is together, can they keep Sherwood safe from the sheriff and his men?

Strickland's writing style is easy to read and engages the reader. Being a historical, Strickland's word choices don't slow down the reader and still capture an air of authenticity. What I loved is how Strickland's creativity and imagination shines in this original take on Sherwood Forest and the Robin Hood tales.

Indeed, the characters are a treat. Curlew embodies the nobility of his great grandfather, Robin Hood. Anwyn's inner conflict pits her against the past and her desire for a happy future. Sherwood comes alive, capturing a deep element of natural spirituality that the residents embrace. If anything, it seemed like the challenges the characters faced were too easy for them.

"Lord of Sherwood" is a historical romance with several tasteful love scenes. This is book three in the series, but reads well as a stand alone. "Lord of Sherwood" will warm your heart and keep you turning the pages to find out what happens next.  I highly recommend this book.

GO HERE TO ENTER THE RAFFLECOPTER GIVEAWAY:  http://www.rafflecopter.com/rafl/display/28e434229/ Enter to win a $10 The Wild Rose Press GC and handcrafted bookmark! A Rafflecopter Giveaway 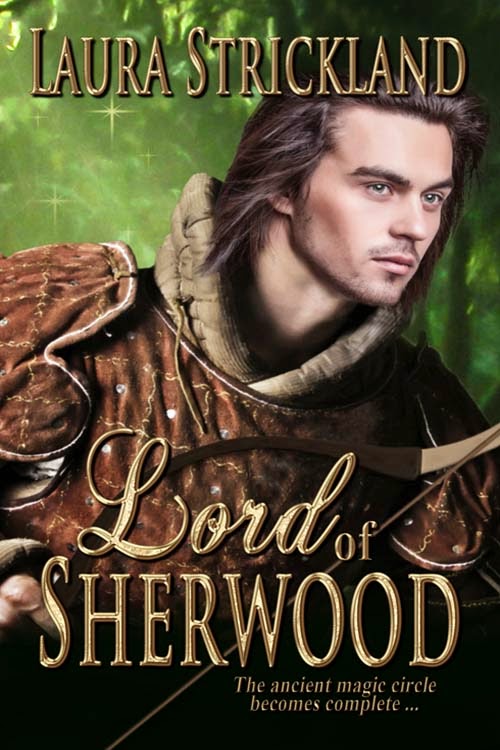 Born and raised in Western New York, Laura Strickland has pursued lifelong interests in lore, legend, magic and music, all reflected in her writing. Though her imagination frequently takes her to far off places, she is usually happiest at home not far from Lake Ontario with her husband and her "fur" child, a rescue dog. Author of Scottish romance Devil Black as well as The Guardians of Sherwood Trilogy consisting of Daughter of Sherwood, Champion of Sherwood and Lord of Sherwood, she is currently working on the second book of a new Steampunk romance series.