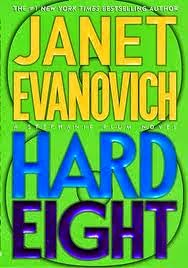 Evanovich goes gritty with "Hard Eight." Stephanie's neighbor, Mabel, put her house up as collateral in a child custody bond for her granddaughter, Evelyn. Evelyn and her daughter, Annie, have gone missing and Mabel might lose her house. Stephanie agrees to help find Evelyn and Annie, but things get complicated when Eddie Abruzzi enters the picture.

Evelyn has something Abruzzi wants and he'll do anything to get it back including fire bombing Stephanie's vehicle and chasing after her as a bunny rabbit. Can Stephanie find Evelyn and Annie before Abruzzi?

Evanovich's writing is crisp and witty. The pacing flows well and the story is easy to read. Even after eight Stephanie Plum novels, the plot is fresh and the characters continue to grow. There's always something unexpected that happens.

The supporting cast continues to entertain. Ranger proves a help to Stephanie, but is she willing to pay his price? "Hard Eight" is full of hard knocks, hard choices, and characters like Albert Kloughn who find it hard to go away.

"Hard Eight" is a cozy mystery with romantic elements. The ending is one of the more grittier ones in the series. "Hard Eight" promises to keep the reader guessing right up until the end. If you enjoy mystery, suspense, and great characters, "Hard Eight" will keep you turning the pages.

Question: Who is your favorite Stephanie Plum character? Why?
Posted by Stephanie Burkhart at 1:30 AM