Vote for Romance of the Year at Deep in the Heart of Romance: A Gentleman and a Rogue 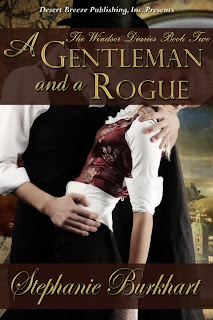 5 Stars, Trudi LoPreto, Reader's Favorites:
"I was hooked in it and did not want it to end. All of you romantic historical fans don’t miss this one – it is a winner."

BLURB:
Lady Keira Russell is destined to bring compressed natural gas to Britain. Her inner courage and mental toughness rarely falter – except when Prince Edmund Windsor is involved.
Edmund of Wales is from the future. His last jaunt through history muffed up the time line. Now, he's here to set it straight and win Keira's heart.
For Keira, if it isn't one obstacle, it's another. Queen Victoria has sponsored a competition to find a cleaner fuel source than coal. Keira's father is trying to build a windmill and the Ridgecrofts are working with gasoline. Then there's Edmund, whose sensual kisses and heated stares distract her down to her bones.
Keira has a choice: trust Edmund's notorious mischief-making or put her faith in Queen Victoria to make the right decision, but if Keira makes the wrong choice, the future of Great Britain will be changed forever.

Posted by Stephanie Burkhart at 4:43 PM

Email ThisBlogThis!Share to TwitterShare to FacebookShare to Pinterest
Labels: A Gentleman and a Rogue, Contest, Deep in the Heart of Romance, Vote