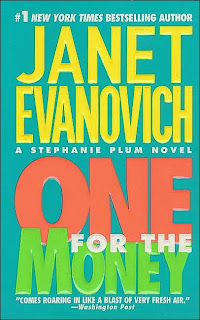 5 Stars
Catchy, witty, and clever, Evanovich shines with "One for the Money." Set in the mid-1990's in New Jersey, Stephanie Plum is unemployed and up to her neck in debt. She needs money fast so she goes to her cousin, Vinnie, and elects to do some bounty hunting, but can she haul in a $10,000 prize without losing her head?

Stephanie's main target is Joe Morelli, a boy she grew up with who is now a cop accused of killing someone in cold blood. As Stephanie snoops around looking for her "FTA" she opens up a can of worms with the real killers who begin to target her. Can Morelli keep her safe while clearing her name? Is Stephanie "up" for bounty hunter work? Can she make it a profession? Or will her jeep blow up with her in it?

Evanovich's writing style engages the reader with witty quips and clever word choices. The novel is an easy read that completely envelops the reader in Stephanie's world. The supporting cast is colorful and crazy, grounding Stephanie and giving her the appearance that she's the sanest of the bunch.

The novel is a murder mystery with a dash of suspense, a pinch of romance, and a helping of comedy. "One for the Money" is one book you can't put down. It's great, light fun reading that will have you chuckling as you sit on the edge of your seat.
Posted by Stephanie Burkhart at 4:30 AM