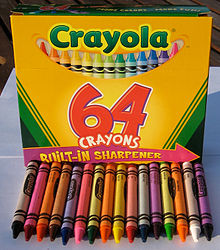 So what makes Crayola special? I'd venture the love, care, and innovation found in every product. Crayola may be 110, but they've always been innovative and that's what made them succeed through the decades.

Binney & Smith in NYC founded the company in 1885.  Their original focus was on producing industrial pigment and supplying it to others. Soon, they began branching out. In 1904, they won a gold medal at the St. Louis world's fair for the dustless white chalk.

Binney worked with his wife, Alice, and in June 1903, they produced the first wax crayon. Alice came up with "Crayola." "Craie" in French means "chalk" and "Ola" was short for "oleaginous" or oily.

In 1926, Binney and Smith bought out the Munsell color company crayon line and added 22 new colors to their inventory.

In 1984, they bought Hallmark. Their current products include chalk, crayons, markers, and colored pencils.

Currently, they make 133 colors. 13 colors have been "retired," such as maize, raw umber,  thistle, and mulberry.

You can visit the official Crayola museum called "The Crayola Experience," in Easton, PA.

Did you Know?
The world's largest crayon is at "The Crayola Experience." It's 15 feet long and weights 1500 lbs.

Question: Can you guess what color the world's largest crayon is?

In 2000, Crayola asked America to vote for their favorite colors.  George W. Bush gave a shout out to "Blue Bell." Courtney Cox said hers was "red." Blue came in first, #2 was cerulean, and #3 was purple heart.

Question for you: What's your favorite Crayola color? 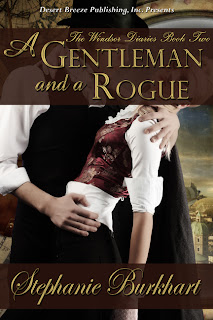 Author Bio: Stephanie Burkhart is a 911 dispatcher for LAPD.  Her favorite color is cerulean.

Enjoy this excerpt from "A Gentleman and a Rogue," Book 2 of The Windsor Diaries, her steampunk romance series.

The song ended and Edmund grabbed her hand, tugging her toward the nearest hallway. At first, she wanted to protest; call out for her father and defy Edmund's wishes, but then reason kicked in. She wanted -- no, needed -- answers. And, she had plenty of questions.

Email ThisBlogThis!Share to TwitterShare to FacebookShare to Pinterest
Labels: A Gentleman and a Rogue, crayola, crayons, entertainment, fun