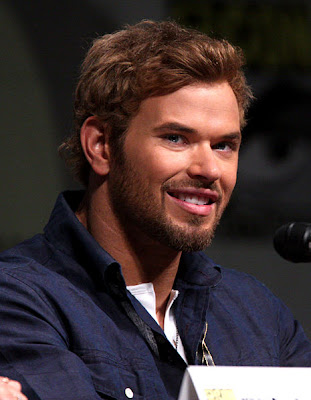 Welcome to good looking man Monday. :) It's a great way to start off the week. My pick for this week is Kellan Lutz.

Sigh... for me it's the eyes. Piercing and soulful, they make Kellan stand out in a crowd. What about Kellan makes you smile? I'd love to hear it.

Just a little about Kellan:

He was born in North Dakota and according to Wikipedia, he went to Chapman University for chemical engineering before becoming an actor. (Hey, I went to Chapman for a year in 1998-9!)

He had roles in the American soap "Bold and the Beautiful" and the NBC Drama, Heroes, before being cast as "Emmett" in the Twilight movies.

Note: Photographer and Actor do not endorse my writing in anyway.
Posted by Stephanie Burkhart at 6:00 AM