I'm pleased to announce my steampunk romance won BRONZE in the 2012 Reader's Favorite Contest in the Romance: Historical category. Here's a look at Victorian Scoundrel: 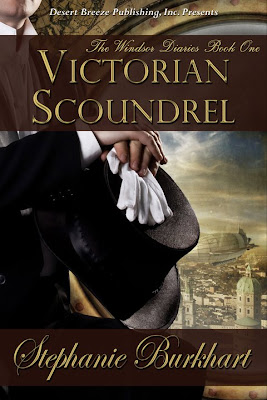 BLURB: It's 2011 and compressed natural gas has taken over form the coal producing steam machines of the Victorian Age. Alice Windsor, Princess of York, follows her mischief-making cousin, Prince Edmund of Wales back to the past and 1851 where Prince Albert is hosting Britain's Great Exhibition.   Alice soon discovers Edmund has struck up a friendship with their great-grandfather, Prince Albert, and his mischief making entails leaving a dinosaur-sized footprint in history.

She also meets Grayson Kentfield, Earl Swinton, and the Prime Minister, Sir John Russell. The Prime Minster finds her odd, to say the least.  It's only when Alice falls for the handsome Earl Swinton does she realize the dangers of time travel. How can she give her heart to a man from the past while striving to stop Edmund from changing time with his forward thinking ideas?

Several carriages waited nearby. No one in their right mind would let her into the palace looking like she did -- like she had just stepped out of the gutter.   "Excuse me, who are you?"