Announcing my GOLD winner in the 2012 Reader's Favorite Contest: The Wolf's Torment 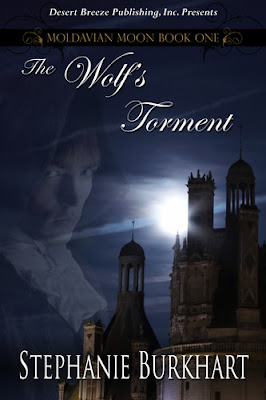 I'm so excited to officially announce my novel, The Wolf's Torment won GOLD in the 2012 Reader's Favorite Contest in Fiction: Supernatural. Here's a little bit about the book:

REVIEWS:
Pen & Muse: "A complete werewolf story through and through, Burkhart does it again with an amazing cast of characters, entertaining dialogue and plot."

Joy Cagil, Amazon Reader, 5 Stars: This novel is not only a highly entertaining page-turner but also it boasts its author's mastery of fiction. I loved it."

Dina Hickman, Amazon Reader: "Stephanie creates the perfect blend of romance and suspense in her novel, "The Wolf's Torment."

Romance Reviews: 3 Stars: "I would highly recommend THE WOLF'S TORMENT. You will find it satisfying, even as it leaves you hungering for more."

Mona Risk, Amazon Review: 5 Stars: "I enjoyed this book enormously and read it in one sitting."

BLURB: It's 1865 in Moldavia, a country nestled against the shores of the Black Sea, and Crown Prince Mihai Sigmaringen returns after receiving an education in England. His best friend, Viktor Bacau joins him. Mihai is intent on modernizing his nation, but he's also a witch, and it's time he embraces his heritage. The tasks in front of him are many including getting married.

Her voice was matter-of-fact, pricking at his faults, but damn if she wasn't beautiful in the firelight. The rest of his plans for the evening could wait.

He held up his glass. "Would you like a drink?"

She clapped her hands and a smile tipped the corner of her lips. "I've never tried it, but it smells like it would be an interesting adventure."

He chuckled at her lightheartedness and went to the hidden bar, disguised as a closed shelf in the library walls, and removed a clean glass. He poured her the drink and gave it to her, his eyes sweeping over her face, probing her soul. Her emotions were an open book.

She wanted him to touch her. She ached for it. She wanted him to drive the loneliness away. The thought of sharing a more intimate embrace with her was enticing. He held up his drink and they clicked glasses, sipping the amber liquid.

She didn't gag or choke, but swallowed hard and narrowed her eyes. "What a crisp adventure. I do believe it's warming my stomach."

He chuckled and held out his hand. She gave him the glass. He put it on the desk, then leaned against it again.

A burning curious look came into her eyes.

"Come here." His voice was raw and husky. She walked toward him slowly, her hips swaying.

"What are you thinking?"

"I'm sorry you were lonely."

She stopped in front of him and he lunged out and grabbed her waist, pulling her closer, settling her between his legs. Her body pressed against his and she put her hands on his chest.
For an instant, an intensity stole into her expression, an intensity he hadn't spotted before.

"I don't believe I've ever been this close to you."

"No, I don't believe you have either, but I rather enjoy it. I hope you do as well."

"What do you say we do a little sinning tonight so we have something to be penitent for?"

Her face grew eager at the suggestion. Damn. His blood raced through his veins as his heart hammered in his chest. Desire for her overtook his senses. He had an intense awareness of her thrumming through his body.

"Such naughty thoughts, my Prince."

Desire smoldered in her eyes. He wanted to kindle that into a raging fire. For him alone. He claimed her sweet lips, crushing her against his body. She slid her hands up his chest and clutched his shoulders. Her body tensed, needing release. He deepened the kiss, refusing to let her escape. God, no, he refused to let his woman out of his arms. Mihai traced the soft fullness of her lips and she parted her mouth for him. Lord, her mouth was soft and sweet and giving. His tongue explored the recesses of her mouth, coaxing her to explore his.