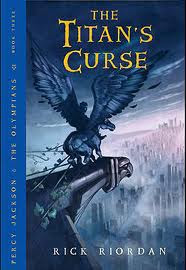 "Full of Action and Adventure!"

The Titans Curse is a suspenseful, edge-of-your-seat addition to the "Percy Jackson and Olympians" set. This is the 3rd book in the series. Percy is now fourteen. He's sent on a mission with his friends to recover two half-bloods, but Kronos' army wants them, too. What makes the diAngelos so special and what is "The Titan's Curse?"

The novel opens with a battle over the diAngelos, two half-bloods staying in a military-like school. The goddess, Artemis, intervenes to help. The diAngelos are saved, but Annabeth, Percy's friend, is kidnapped. Artemis goes on the hunt and sends her hunters to Camp Half Blood to keep them safe, putting her lieutenant, Zoe Nightshade, in charge.

While at Camp Half Blood, Zoe rubs everyone the wrong way. The Oracle also makes a surprising appearance with a prophecy. Soon, everyone learns Artemis is in danger and Kronos' minions want a child of the big 3 (Hades, Poseidon, Zeus) for a very evil purpose. Zoe takes Bianca, Grover, Thalia, Zeus' daughter, with her on the quest. Percy follows along, but is soon discovered. Action, adventure, and danger are on the menu. Can Percy and the Olympians find Artemis and Annabeth and prevent the titan's curse from coming to fruition?

Riordan's writing style is crisp, sharp, and easy to read. There's a very comfortable flow to his writing which pulls them along, making them feel like a member of Camp Half Blood.

What I enjoyed about the novel was how it appeals to younger readers. There's likable heroes and Riordan's modern take on the Greek gods make them interesting to a new, younger modern audience.

Watching Percy grow and interact with his friends is heartwarming. I love how the story has a very silent, but resonating message of the power of friendship, loyalty, and honesty.

Percy's a bit more mature as character, but still reckless in ways. He's loyal to the bone – especially to Annabeth. Thalia, Zeus' daughter, was also a delight to meet. When her loyalty is tested, Thalia finds strength in her noble lineage. What I enjoyed about the diAngelos and their mystery was trying to put the clues together to figure out who their Olympian parent was.

The ending does not disappoint. It's loaded with a lot of surprises and some heartwarming moments.

"The Titan's Curse" is a middle school/young adult fiction. I would recommend this story for 4th grade on up.

I'd love to hear your thoughts on Percy. Have you read a book? Watched the movie?