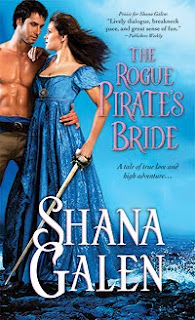 Shana Galen delivers again with "The Rouge Pirate's Bride." This story is the third installment of the "Sons of the Revolution" series and is packed with action, adventure, betrayal, greed, and clever characters. Sebastien Harcourt has found his way in the world as a pirate, but has he met his match with Raeven Russell, an admiral's daughter, who proves she's just as resourceful as any of Sebastien's crew? I've read the previous stories in this series, and I enjoyed them very much. I was looking forward to reading Sebastien's tale and for me, this story did not disappoint.

Set in 1802, Sebastien has escaped the turmoil in France only to become the captain of a pirate ship. He's on the hunt for another pirate, Jourdain, who killed his mentor. Raeven Russell is an admiral's daughter who wants revenge on Sebastien for killing her fiancé in a ship battle. The novel opens with plenty of excitement as Raeven, disguised as a man, challenges Sebastien. He gets the best of her, but not before revealing she's a woman, causing the sparks to fly between the couple. They meet again, several months later and it appears time has not lessened the sparks between them. Can Sebastien and Raeven tame their attraction or will it prove their undoing?

Galen's writing is full of witty dialogue, vivid descriptions, and effortlessly plunges the reader into Sebastien and Raeven's world. The plot moves at just the right pace, leaving the reader breathless.

The most rewarding part of the story is the rich characterization. Sebastien is full complexities, hurt over losing his family and mentor, yet so very giving with Raeven. Raeven is a spitfire, not afraid to look danger in the eye, and is full of tricks, yet her heart is wounded as well.

The story has several love scenes that are tasteful and embody the sensuality that Sebastien and Raeven share. "The Rogue Pirate's Bride" is a page-turner, full of emotion, danger, suspense and heartwarming romance. I highly recommend this book.