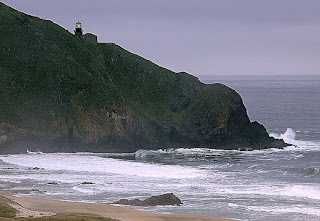 California's Central Coast is one of the longest and remotest areas of the coastline. Let me paint you a picture – we all know where LA is, now go approximately 100 miles north and you find Santa Barbara. Approximately a 2 hour drive north from Santa Barbara is San Luis Obispo and San Simeon, where the Hearst Castle resides. Continue north and the coast turns rugged and remote. The next major city you'll come up to is Carmel and Monterey – an approximate journey of 3 hours. Point Sur is in this rugged patch of land, closer to Carmel and Monterey. While there were lighthouses near San Luis Obispo and Carmel, it was soon determined one was needed at Point Sur.

The big shipwreck that spurred action was the Ventura in 1875. It should be noted that while not having a light on Point Sur contributed to the wreck, it didn't help the Captain was drunker than a skunk.

Congress soon allocated the money for Point Sur to be built. The facility was constructed on a 361 ft. tall rock. Between the rock and mainland is a "tombolo," lowland that is covered with water from time to time cutting off the rock from the coastline.

The light at Point Sur was lit on 1 August 1889. According to my research, it first used an oil wick lamp with whale and lard oil then kerosene used as the fuel. Finally, a 1st order Fresnel lens was brought in. The lens was practically 9 feet tall itself. The visibility of the lens was 23 nautical miles. 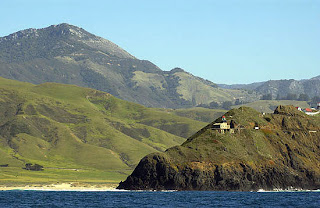 To help out during dense fog, a foghorn was installed – run by coal generated steam.

Point Sur is known as a light station – not a lighthouse. Why? Because it was so remote, it basically had to provide for itself since there was no road until 1937.

There was 1 head keeper and 3 assistant keepers. A cistern held the water, a barn held the cattle and horses, and blacksmith shop provided metal supplies. The kids didn't go to school daily. In 1927 a school teacher was assigned. They were usually young women straight out of college. Unfortunately, they didn't last long since the area was so remote and lonely.

How did the station get their supplies? Animal feed, coal, and firewood arrived on long, broad ships known as a "lighthouse tender." It would anchor near the station and the supplies put on skiffs and towed to land. That's a hard life if you ask me. 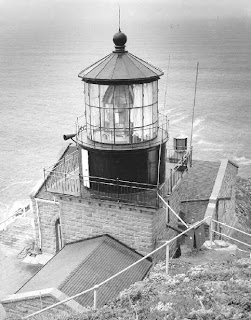 Finally in 1937, Highway 1 connected Point Sur to the rest of the world. Known in California as the Pacific Coast Highway, it runs as close as it can to the California coast from San Diego to the northernmost border. Once that happened, the US Coast Guard took over the lighthouse station in 1939.

On 12 Feb 1935, the USS Macon, a dirigible crashed at Point Sur. The lighthouse keeper related that the fin went to pieces and the nose dived into the water. Out of the 83 crewmembers only 2 survived. The Macon was powered by helium. (much safer than hydrogen and that's not saying a lot) The skin was cotton, the frame, aluminum and the airship was 3 times as long as a Boeing 747. Top Speed? 80 mph. The Macon also carried 4 reconnaissance airplanes. 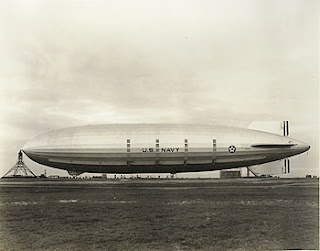 In 1974 the last Coast Guard keeper left the station. The light is now fully automated with an aero beacon used for light and airhorn instead of a coal-driven steam powered foghorn. The 1st order Frensel lens is on display at the Monterey Maritime museum. You can find a display of the Macon at the Point Sur light station visitor center. The station is one of the complete and preserved in California.

GOOD READS:
http://www.goodreads.com/author/show/4031660.Stephanie_Burkhart
Posted by Stephanie Burkhart at 6:00 AM