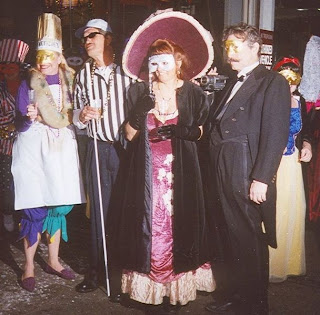 The 12 days of Christmas is one of our favorite carols of the seasons, but have you ever wondered about it's origins? Here's some interesting tidbits:

The song was first published in England in 1780, but there's strong textual evidence that suggests the song is much older and has French roots.

In fact, 3 French versions of the song are known. If you take "A Partridge in a Pear Tree" literally, the only type of partridge that perches in pear trees with any frequency is the red-legged partridge – found in France. This partridge was not successfully introduced into England until 1770.

The song was brought to the U.S. in 1910 by Emily Brown, who was a teacher in Milwaukee, WI. She heard the song in England and needed a song for her Christmas pageant.

On a more religious note, the 12 days of Christmas usually start on Christmas and last until the Feast of Epiphany on the 6th of January in most Christian religions.

My son, Andrew and our Christmas Tree 2010 Modern folklore implies the song was used a "catechism song" for Catholics in England between 1558-1829 when Catholicism was frowned upon. Here's how it was used:

There are minor variants on the song. For example: calling birds for colly birds (blackbird)

Currently, English composer Frederic Austin arranged the standard version. The copyright was registered in 1909 and is still active by it's owners, Novello & Co. Limited.

May you all have a happy and fulfilling 12 days of Christmas.

Info for this blog post was taken from Wikipedia:
http://en.wikipedia.org/wiki/The_Twelve_Days_of_Christmas_(song)
Posted by Stephanie Burkhart at 7:11 AM