History of Halloween - Trick or Treat?

Halloween decorations in front of my house this year. 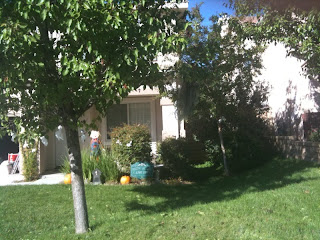 The origins of Halloween are more typically linked to the Celtic festival of Samhain. (pronounced Sow-an) Samhain was a festival held to denote the end of the summer. For them, the "lighter half" of the year was ending and "darker half" was beginning. They believed that during Samhain the plane between this world and otherworld grew week, allowing spirits, both good and bad, to pas through. To ward off the bad spirits people would disguise themselves as bad spirits themselves so no harm would come to them. Over the years this tradition continued.

The name of Halloween comes from "All Hallow's Eve" which is the night before "All Hallowmas." Hallow in Old English means to sanctify. Nowadays we call the day after Halloween, "All Soul's Day" and it's a day to honor the souls in Heaven in many churches.

The practice of going door-to-door to trick or treat has it's roots in the practice of 'souling.' (which origins are in Britain and Ireland) Children would go door-to-door singing and saying prayers for the dead and they would receive a small cake for their efforts. 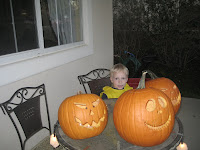 Before there were pumpkins, there were turnips. In more traditional Celtic festivals, large turnips were hallowed out and scary faces were carved into them. They were then placed into windows to ward off evil spirits. When the Irish came to America and discovered pumpkins, they began to use them since pumpkins were bigger and easier to carve.

Author Ruth Edna Kelley wrote a history of Halloween in 1919 and the custom of trick or treating wasn't even mentioned. The term trick or treat didn't appear until 1934 in a Halloween greeting card. Surprisingly, trick or treating in America didn't gain national recognition until the late 1940's after World War II.

Anyone like to share what they do for Halloween?
Smiles
Steph
Posted by Stephanie Burkhart at 11:32 AM

Email ThisBlogThis!Share to TwitterShare to FacebookShare to Pinterest
Labels: History of Halloween