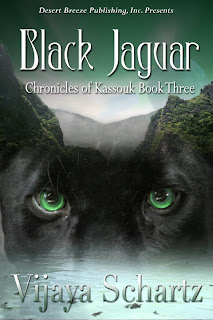 Reviewer's note: I love Schartz's Chronicles of Kassouk series. Book 3 releases on 1 NOV, but I got a sneek peek of it. For those who love sci-fi/futuristic, romance and adventure, this series as it all!

Schartz pens an exhilarating story of adventure and the power of love with "Black Jaguar," book three in her futuristic series, "The Chronicles of Kassouk." Prince Kahuel of Yalta travels with Princess Esperenza of Kassouk to an unexplored continent on New Earth. What they find there will test their strength of will, resolve, and courage.

The novel is set in the future. Princes Kahuel and Basilk of Yalta are traveling with Princess Esperenza from Kassouk to an unexplored continent on New Earth. A typhoon destroys their vessel and takes Basilk's life. Most of the travelers are marooned on an unknown land. Kahuel is saddened over his brother's death, but steps up as the group's leader.

Kahuel sets up camp on the beach and send parties to explore the interior. Kahuel, with his loyal jaguar, Diablo, finds a native by the waterfall. Her name is Talina and she is a Princess of the Chosen, the native humans who have the power to read minds. Kahuel is attracted to Talina.

The Chosen are in contact with the Estrell, a race of people from outer space who want to use the Chosen to repopulate their dying race. Kahuel and Esperenza's presence upset the Estrell who order the Chosen to attack Kahuel's people. Talina goes against the order and is banned from the Chosen, by her brother, Vanaru. Talina seeks out Kahuel and the couple makes love. Soon, Talina is captured by the Chosen. Kahuel goes after her, but can the couple overcome the obstacles the Estrell and Chosen place in their way?

Schartz pens an exciting story, about discovery. The plot is tight and filled with surprises.

Schartz uses a good economy of words to paint vivid pictures of the setting. It's easy to see the setting in the reader's mind.

"Black Jaguar" has a great cast of characters that will quickly endear themselves to the reader. Kahuel is noble and honorable, doing all the right things to lead his people, yet his internal struggle is something that the reader can identify with. Talina is a little naïve, but she isn't afraid to take chances and to learn about others. Her love for Kahuel is honest and pure, yet tested when her brother reveals some awful truths about Kahuel to her.

"Black Jaguar" shines as it gives the reader a peek of happy after ever for the previous couples in the series from "White Tiger" and "Red Leopard." Schartz's love scenes are tasteful and sensual.

"Black Jaguar" does not disappoint!

*****
Here's a link to the publisher's page: http://stores.desertbreezepublishing.com/-strse-120/Vijaya-Schartz-Chronicles-of/Detail.bok
Posted by Stephanie Burkhart at 7:20 AM