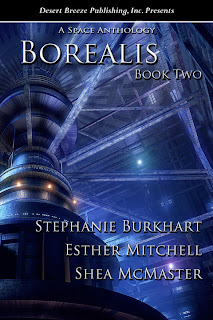 "Shadows & Light" is my science fiction short story in the Borealis II Anthology which will be released by Desert Breeze Publishing on 1 NOV. Here's a bit of an excerpt to tease you... Enjoy!

Elijah Kess hated the stench of sulfur -- and the space dock stunk of it. Other than that, nothing seemed out of the ordinary. Two supply ships had just landed; one from Pith, and one marked with TPP symbols. Shadows refracted off his dark grey uniform. Beams of brilliant white light shined off his gold lieutenant rank square.

The hair on the back of his neck prickled. Something didn't feel right. The air smelled off -- the sulfur stench was thicker. The Borealis space station thrummed to the steady beat of business.

He glanced at the chronometer on his wrist. Thank The Greater Power it was time to go patrol the merchant area. He went to the personal access door and pressed his hand against the rectangular access panel.

Elijah and Dax turned in the direction of the cry. A civilian dressed in a dark green overcoat ran past Korn, the latest bar to open on the main commerce level. He pushed several patrons to the ground as they exited. The civilian's hair was stringy and greasy, his eyes bloodshot, and white foam spewed from the corner of his mouth.

Elijah took off at a sprint, Dax on his heels. The OD locked eyes with Elijah for a split second, then turned and ran. In that second, Elijah saw fear -- primal fear. What could cause that?

His pulse rifle was attached to a suicide strap, but Elijah couldn't fire it -- not a good idea in a crowd of civilians. He slung it over his shoulder so the gun rested on his back.

Civilians rushed to get out of the way. Elijah sidestepped the ones who had been shoved to the ground by the OD.

The OD slowed. Elijah pushed his legs to go faster, pumping his arms, keeping his eyes locked on his prey.

As the OD turned a corner, he shoved a woman right at Elijah. He took the extra second to push her away from him. "I'm sorry," he muttered.

She nodded her head. Elijah sprinted off. That bastard was giving him a good chase.

Dax was three paces behind Elijah. The OD had collapsed. His breathing was labored, his eyes were blood red and white foam dribbled over his chin. A person in a dark cloak ripped off the OD's sleeve. An obsidian patch, two inches in diameter, covered the OD's bicep.

Startled, the figure bolted up. Elijah drew in a breath and took off in a sprint. The figure began to run away from the OD, but Elijah was faster. He tackled the figure -- a woman, from the curves of her body. The patch went flying out of her hand.
Elijah reached for her wrists, pinning her against the floor. He could feel her body underneath his -- warm, perfectly shaped. The cloak fell to the side, partially revealing her face.

She had the warmest chocolate brown eyes he'd ever seen. Round and wide -- yet full of apprehension. She had thick raven-black hair, long, down to her mid-back. Her olive-toned complexion was flawless. For a second, he hungered to run his hands through the luscious mane of her hair.

She thrust her body toward his, taking his mouth with a kiss.

Stunned, Elijah allowed her lips to caress his. They were warm, sensual, tasting of honey.

Her voice in his head startled him.
"Let me go."

The Anthology will be avail on Kindle, Sony Ebook Reader, The Nook, All Romance Ebooks, and at the Desert Breeze site. Here's a link:

http://stores.desertbreezepublishing.com/-strse-121/Borealis-Space-Anthology-Stephanie/Detail.bok
Posted by Stephanie Burkhart at 10:37 AM