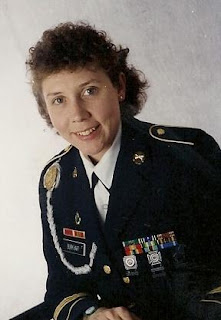 From Wikipedia:
Veterans Day is an annual United States holiday honoring military veterans. A federal holiday, it is observed on November 11. It is also celebrated as Armistice Day or Remembrance Day in other parts of the world, falling on November 11, the anniversary of the signing of the Armistice that ended World War I. (Major hostilities of World War I were formally ended at the 11th hour of the 11th day of the 11th month of 1918 with the German signing of the Armistice.)


US President Woodrow Wilson declared the Holiday on 11 NOV 1919.


I joined the US Army on 8 JULY 1986, one month after I turned 18. My reasons for joining the military at such a tender age were varied, yet very real to me. Quite honesty, I had no prospects. I wanted to go to college, but I had no money. I wanted to get away from my mother, I wanted to see "the world" while I was young, not old. I did my Basic Training and Advanced Individual Training at Ft. McClellan, AL, home of the MP Corp. Now, I believe the MP Corp is at Ft. Leavenworth in KS.

Me in Tazsur, Hungary receiving an Award. 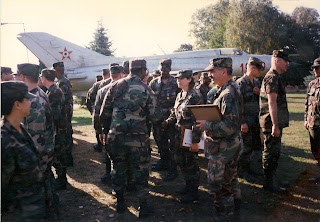 I was sent to Germany in DEC 1986 and my first assignment was at the 583rd Ordnance company. It was certainly an eye-opening experience! I fell in love with Germany and Europe. I went on several volksmarches (which is a another blog post onto itself!) I went to Berlin in 1988 before the wall fell, and I went to Salzburg, Austria, Garmish, and Berchesgarden. I spent a year in Romulus, NY at the 295th MP Co and then I went to MPI school. In NOV 1989, I was sent back to Germany where I was stationed at Fulda and Bad Hersfeld in support of the 11th ACR. I saw the Berlin Wall Fall and I was there when Germany was united as a nation on 3 OCT 1990. Gulf War I broke out, but my unit stayed in Germany. My fiance deployed to Kuwait in June 1991. (after major combat was done) After a tour at Ft. Irwin I went back to Germany in 1995. I deployed to Hungary in the summer of 1997 in support of the peacekeeping efforts in Bosnia.

My time in the military was full of highs and lows, (like failing my PT tests and doing remedial PT, but even then I learned I had to work harder to get what I wanted) but the rich experiences have made me a better person. I got my college education, graduating with a BS from California Baptist University in 1995. I've done things and seen things most people that age usually don't. I know the hardship and loneliness many have when away from loved ones during the holidays. I know the sacrifice.

To those who have served in the military, thank you for your service. I'm proud to be a veteran.

Smiles
Steph
Posted by Stephanie Burkhart at 7:09 AM