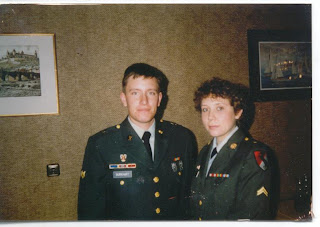 19 years has a lot of meaning for me. After all 19 years is a long time. I remember when I was 19, I was in the US Army overseas in Germany. I visited Paris for the first time on my 19 year birthday. 19 years ago on 14 NOV, I got married.

My husband's hair was blonder when I met him in Oct 1990, close to the color that my son, Joseph's, hair is now. And I've always had a weakness for blond-haired men. Brent and I met in Butzbach, Germany, in the middle of Germany. We were attending a leadership development school (PLDC) and we were in the same squad. There were 15 people to the squad and only two girls. And lucky me - I sat right up front. Grrr... That meant I had to turn around to look at him.

As we got to talking, Brent and I discovered we were both stationed in Bad Hersfeld. He drove for the Colonel and went to the MP station were I worked every Wednesday to dispatch the vehicle. We missed each other by 30 feet for six months!

(See how fate is working it's way in here?)

Brent failed his situps in the PT test and had to do remedal PT. I may have been the last one around the track, (seriously!) but I passed my PT. Poor Brent. He sprained his ankle and refused to go to the medics because he didn't want to be kicked out of the class. I was impressed with his inner strength to stick it out. Soon we were sitting next to each other for all our meals. When we did our field problem, my buddy Ananasi Bloomberg kicked me out of my tent for personal hygene. Brent's tent buddy let me sleep in Brent's bag while he was on guard duty. *lol* 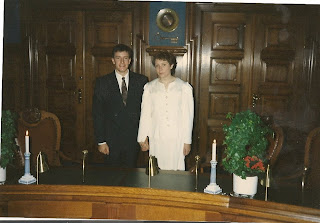 On our "free" weekend, we went back to Bad Hersfeld and went out on our first date to Pizza Hut in Giessen. We both graduated from PLDC and I made the honor graduates being in the top 10 of the class. We went to back to Bad Herself were the romance took off.

I remember playing raquetball with him and losing badly. I couldn't concentrate. I was too busy drooling over him. We went on a couple of volksmarches and so some dinner dates. He came to visit me on duty at the MP Station. I took him up to visit my old unit in Muenster.

Christmas Eve he asked me to marry him. How could I refuse? From JUN-SEP 1991 he was deployed to Kuwait while I stayed in Germany. Then he got orders to Ft. Drum. Instead of getting married on 14 FEB 1992, we pushed up the date and signed up for the Denmark wedding package. We took the train up to Nykobig, Denmark to the city of Falster.

I was excited to get married, but if you look at my pics on THAT day, I have a look like a deer in the headlights. LOL!! My husband still teases me about it. 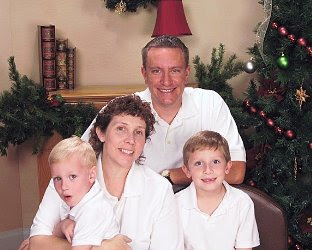 19 years later here we are - still married with two young boys. We've had our ups and downs but we're still here. It's cool. This year on our anniversary, we had the family over to make homemade peirogi from scratch and then we went to our favorite restaurant, a French one called Le Chene. It was nice to get away from the kids. Our first boy, Andrew, came to us when we were 10 years into the marriage so our kids are still young. Fun, but every so often, it's nice to have "adult" time.

Smiles
Steph
Posted by Stephanie Burkhart at 6:59 AM