Christmas in July: avail for 1.99 in ebook - The Faberge Secret 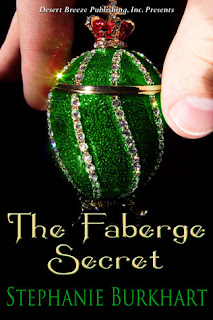 Enjoy some Christmas in July with this suspensefull ebook read:  The Faberge Secret!

Elise Goodwin finds herself faced with danger when she learns the Faberge egg she's bought belongs to a Russian mogul, Dimitri Romanov, but is Dimitri playing a game with Elise's heart to get his heirloom back?Elise Goodwin runs a heritage museum in Brattleboro, Vermont. She travels to Boston to buy some items for her museum at Sotheby's auction. What she acquires is a delicious surprise that would excite any curator – a Faberge egg.Enter Russian businessman Dimitri Romanov. He goes to the auction with the intent of buying the egg only to discover that Elise is in possession of it. His dilemma? He's attracted to the petite brunette with doe-like eyes and a trusting disposition.

Sue Perkins, Author
The Faberge Secret exceeded my expectations. Definitely worth reading more than once. It is such a good book.

Her friend's hands and feet were tied to a chair, and a gag was in her mouth. The room
had been trashed. Their suitcases had been turned over; their clothes and books tossed haphazardly about.
Fear knotted inside Elise. She rushed to the chair and took off Lucy's gag. Dimitri untied the knots at Lucy's feet, concern for her friend evident in his eyes. Elise was thrilled that Dimitri had helped her with no hesitation or reservations.
"What happened?" Elise asked. "Who did this?"
"They were looking for the egg," Lucy said. She glanced at Dimitri, but instead of her earlier resistance to him, gratefulness filled her gaze.
Dimitri froze and glanced up, his stare drilling into Elise. "Egg? A Faberge egg?"
Elise loosened one of the ropes around Lucy's hand and looked at Dimitri, perplexed. "What do you know about Faberge eggs?"
He muttered something in Russian, finished untying the knot around Lucy's other ankle, and stood, straightening his shoulders.
"That's what I lost. What I've been looking for -- my Faberge egg."
BUY LINKS:
AMAZON KINDLE:
http://www.amazon.com/The-Faberge-Secret-ebook/dp/B006LTE2ZS/ref=sr_1_1?ie=UTF8&qid=1324310728&sr=8-1
B&N NOOK:
http://www.barnesandnoble.com/w/the-faberge-secret-stephanie-burkhart/1105070465?ean=2940013874596&itm=1&usri=the+faberge+secret
PUBLISHER'S LINK:
http://stores.desertbreezepublishing.com/-strse-236/The-Faberge-Secret-Stephanie/Detail.bok