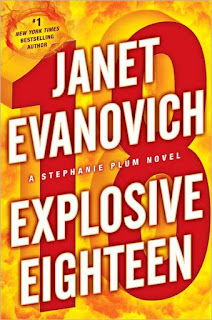 I read:  The hardback

Recommended for readers 13 years or older

Evanovich pens a crafty tale full of suspense, danger, with a pinch of cozy mystery with “Explosive Eighteen.”

On the way back from Hawaii, Stephanie picks up a coded photograph. Not thinking much of it, she throws it out. Then the fun begins. The FBI, the fake FBI, a hairdresser named Brenda, and a crazy hitman called “Razzle Dazzle” wants it.  Stephanie still has skips to catch so she can pay the bills. Lula drinks a love potion and falls in love with one of the skips. Then there’s Joyce – Stephanie’s evil nemesis, who insists on staying with Stephanie when she’s convinced someone is out to get her. Complicating matters are Ranger and Morelli. The vordu may be gone, but both men want her. Can Stephanie avoid the fake FBI, elude Razzle Dazzle, and get the info she needs from Brenda the hairdresser before her car, her home, or her life blow up again?

Evanovich’s writing style is easy to read. Her characterization is spot on with a great supporting cast that includes Lula, Connie, and Grandma Mazur. It’s the people around Stephanie who give the story heart. The plot builds nicely, but the reveal is a bit convoluted, and I was left saying ‘what just happened?’

Overall, “Explosive Eighteen” is an entertaining story that will make the reader laugh, groan in frustration, and keep them turning the pages to find out what happens next.

Question:  Who is your favorite character in the Stephanie Plum series?