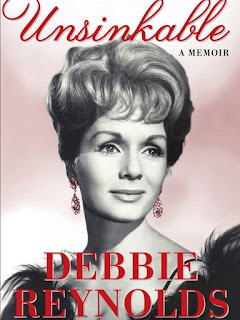 Debbie Reynolds tells her story in a very endearing manner with "Unsinkable." The book focuses on the latter part of her career and life. It starts with Debbie marrying her third husband, Richard Hamlett.

Debbie's kindhearted nature shines in this memoir. Her desire to create a museum to house her Hollywood memorabilia is genuine, but poor personal choices threaten to derail her. Debbie enjoys working and entertaining her fans. Throughout her challenges and disappointments, her children, Todd and Carrie, help to steady her.

The writing is easy to read and engaging. The chapters are well organized, and I enjoyed reading about the movies she made. What touched my heart was how Debbie dealt with hardship. Her third husband proves deplorable and bankrupts her. Debbie looks adversity right in the face and picks herself back up with class.  Nothing can sink Debbie's resolve to start new chapters in her life when she has to.

I was motivated to learn more about her story after hearing of her tragedic death. I discovered Debbie Reynolds was a gifted entertainer, funny, charming, and kind-hearted.  How she carried herself in the face of adversity is to be admired. I didn't want to put his book down. Even if you're not a fan of Debbie, her story is compelling and will touch your heart. She's truly "Unsinkable." I highly recommend this book.

Question for you: Have you seen a Debbie Reynolds movie?  Which one?
Posted by Stephanie Burkhart at 1:30 AM