2.99 Steampunk Romance: A Gentleman and a Rogue #kindledeal 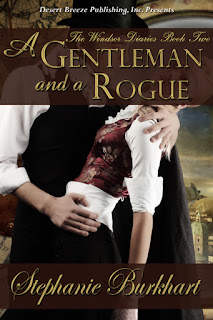 
Keira stepped forward and stood next to Edmund. With a gentle touch, she placed her hand on Edmund's elbow. Pride swelled through him. He wasn't quite sure what to do next, but he needed to put Jonas on notice concerning Keira.

Jonas nodded, acknowledging Keira. A new respect grew in his eyes and Edmund scowled. No way in Hell would he allow Jonas near his woman.

He chuckled. "Be thankful I'm not a scoundrel like Mr. Windsor. Now, I suggest you and the Windsors leave this room."

"Not until you tell me why." Keira's voice was firm.

"Why my father? This time? Why wind?"

Jonas cocked his head to the side and an amused little grin crossed his face. Edmund
wanted to smack that expression clean into next week. Instead, he gritted his teeth.

"It was His Royal Highness who piqued my curiosity when he asked me for my help with
the time traveling machine."