Book Review: The Invasion of the Tearling by Erika Johansen #bookreview #queenofthetearling 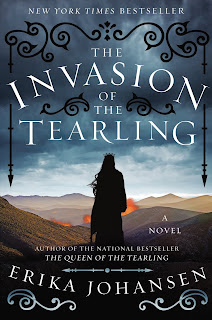 Johansen pens an enthralling sequel with "The Invasion of the Tearling." Kelsea's kingdom is invaded by the Mort, and she must master her power and secrets or the Tear will die.

Picking up where book one leaves off, Kelsea is preparing for invasion. While this is heavy on her mind so are other matters - the Arvath and their greed, her emotional growing pains, and her struggles to teach herself the power of her sapphires. Secrets, too, threaten to undermine her. Who really is the red queen? What is the Fetch trying to atone for, and why does Row Finn need forgiveness?

Johansen's writing is easy to read and she's a master at dropping clues. It's the reader's job to put them together. The plot pushes forward like a locomotive, unable to hold back.

The characterization is spot on, depicting Kelsea's triumphs, and emotional struggles with the darkness from the stones that threatens to engulf her. The supporting cast each have stories that tug on the reader's heartstrings.

Invasion of the Tearling is a fictional fantasy novel that I would recommend for 18 years old and up for strong language, drug use, and sexual situations. It's a fantastic read, completely riveting, and will leave the reader breathless. I couldn't stop turning the pages!
Posted by Stephanie Burkhart at 1:30 AM