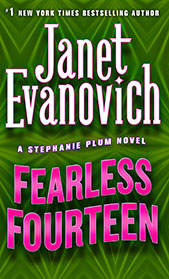 Evanovich brings her unique brand of humor and nail-biting suspense to Stephanie Plum’s latest adventure in Fearless Fourteen. Dom Rizzi robbed a bank and hid the money which was never found. Now that he’s out, people are coming out of the woodwork looking for a dollar or two from the stashed loot.

When Dom’s sister, Loretta, a skip Stephanie is helping out, is kidnapped, Steph’s stuck with Loretta’s teenage son, Zook. She takes the teenager to Morelli’s house, but soon people are breaking into Morelli’s house looking for the money Dom hid.

When Dom’s associates start to show up dead, Stephanie realizes time is running out to find Loretta. As she gets closer to the kidnapper and money, Dom goes missing and the kidnappers start sending Morelli body parts. Can Stephanie find Loretta and the money before more people die?

Evanovich’s writing is crisp and easy to read. The story has a nice blend of action and characterization. The supporting cast continues to entertain, especially as Lula plans her wedding to Tank. If anything, the Morelli/Loretta angle is a bit unsettling, and it felt like Evanovich was reaching for a twist that wasn’t really needed.

“Fearless Fourteen” is a cozy mystery that offers laughter, suspense, and will the keep the reader turning the pages to find out if Steph and Morelli can find the money and save Loretta before the bad guys can.

Question: Who is your favorite supporting character in the Stephanie Plum series?

Posted by Stephanie Burkhart at 11:51 AM