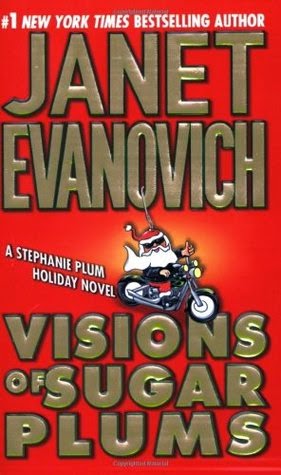 Book Review for: Visions of Sugar Plums
Written by: Janet Evanovich
St. Martin's Press
ISBN: 0-312-98634-3
Avail in print and as an ebook

Stephanie Plum's in for a Christmas full of sparks with "Visions of Sugar Plums." When Diesel pops into her kitchen looking for "Sandy Claws" an FTA given to Stephanie to find, Christmas becomes ultra chaotic. Can Stephanie find time to shop and bring Sandy Claws in?

Christmas is crazy for Stephanie's family and Stephanie is behind the power curve. She has no money for a tree, gifts, or decorations. Cousin Vinny gives her a job to bring in Sandy Claws, a retired toy maker, but Sandy is proving more trouble than he's worth, especially when the electricity all over town starts acting hinky. Diesel, is a supernatural being who is tracking down Ring, a person going after Sandy Claws. Will Diesel get his man and will Stephanie get a tree for Christmas?

Evanovich's story is easy to read, whimsical, and endearing. It captures the essence of the season including in-your-face commercialism to heartwarming sentiments. Evanovich's characters continue to entertain. The Plum household is just as wild as a zoo. Mary Alice still thinks she's a horse. Grandma Mazur has a new stud muffin but it's Valerie who gets the biggest gift of all.

Visions of Sugar Plums is a light, fun, engaging read. The story is a cozy mystery with a splash of comedy that will have the reader laughing as they turn the page.

Question: Who is your favorite character in the Stephanie Plum series?