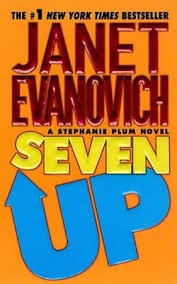 Evanovich's bounty hunter, Stephanie Plum, is up to more hijinks in "Seven Up." When Eddie DeChooch skips bail it's up to Stephanie to bring him in. Eddie may be old, but he's got his wits and he's able to avoid Stephanie like the plague.  Complications arise when Dougie, then Mooner, disappear. Stephanie figures out Eddie wants something from Dougie, but has no idea what. She's going to need help from her friends Lula and Ranger to bring Eddie in.  On the home front, Valerie, Stephanie's sister moves back home, while marriage plans with Joe Morelli move forward. What's a girl to do?

Evanovich's writing remains crisp and witty after seven installments. There's never a dull moment in Stephanie's adventures. The supporting cast is delightful. Grandma Mazur still finds entertainment in visiting the funeral parlors and Valerie is convinced she wants to be a lesbian. Evanovich continues to tug on the reader's heart with her all too human characters.  Even after seven books, there's always something new to learn about them.

"Seven Up" is a cozy mystery that leaves the reader guessing right along with Stephanie as she uncovers the clues to solve the case. I would recommend this book for thirteen years on up. You'll laugh, gasp, and hang onto the edge of your seat. "Seven Up" is a very satisfying addition to the series.

Questions for readers: Who is your favorite character in the Stephanie Plum series?
Posted by Stephanie Burkhart at 1:30 AM